A First-Timer Shoots in the CMP President’s 100 Match

I have been going to Camp Perry for over half my life. I have been shooting in the Civilian Marksmanship Program sports for that entire time and have learned a few things about what it takes to be competitive on the line.

That said, I have only shot in the Springfield, Garand, and Vintage matches. This year was my first time firing a modern service rifle at Camp Perry and I can say that it was certainly an eye-opener.

I was lucky as the weather was pretty good on the day of the match. I have to admit that I’m somewhat lazy and usually pick afternoon matches so I don’t have to get up at 0500, but the President’s 100 is an all-day match that starts early. After a good night’s sleep, I was on the line at about six and in the pits before seven. The mornings at Camp Perry are cool for the most part and I was quite comfortable.

The pits are where the targets are kept. The uninitiated may be surprised to learn that competitors shoot over the heads of your squad as two people on your firing point are literally downrange.

The pits themselves are a series of concrete walls that are built into the range and have a thick earthen berm that faces the shooter with a trench behind it. There are metal structures that hold the targets. These are raised and lowered by the pit crew to mark shots for score. The pits are narrow and tight, but most people don’t mind being down there.

The firing order for the President’s 100 is quite simple in this match and both similar and different to the firing order in the Garand and Springfield matches. The round count is the same at 30 shots for score, but you aren’t allowed sighting shots as you are in the other CMP matches.

Every shot taken is for score. Unlike the others, you start the President’s 100 from the standing position at 200 yards. Most matches I’m familiar with finish with standing.

The nice part about the President’s 100 is that you don’t fire all of your shots at once. You will fire three separate times.

All shooters fire at 200 yards before moving to 300 and then to 600 yards. The 35-round string in the Garand and Springfield matches can be exhausting and the guns can get very hot. Most shooters in these matches complain of fatigue, as you’re firing for about 45 minutes, usually in a hot shooting coat. You have lots of time to cool off in the President’s 100. 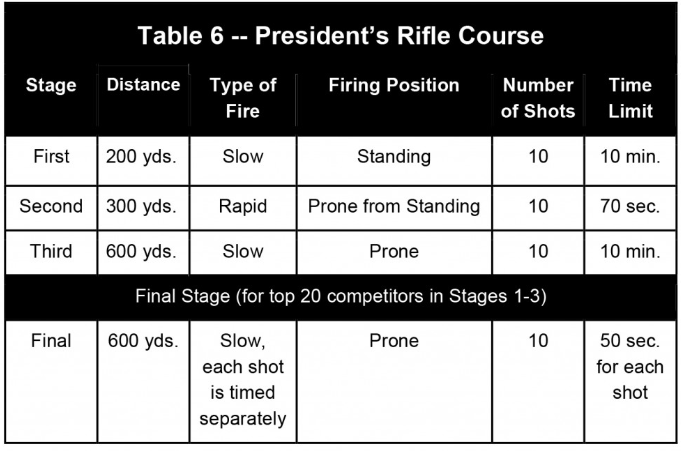 Firing the 200 standing was somewhat easy, as I’m used to shooting at the same distance with iron-sighted rifles in .30-06. The recoil from those larger rounds makes offhand a bit of a challenge, so it was comparatively pleasant firing 5.56. This is where the similarities ended for me and the match became more difficult. The thing about match day is that you never know what to expect. Almost anything can happen. Within one afternoon at Camp Perry I saw two scopes come loose, a trigger pin come out, a stock screw shake itself off while the gun was being rolled in its cart, a guy bring the wrong ammo, and several bad jams.

In all cases, the shooters had been using the rifles all season with no issues. Camp Perry has a way of making unusual things happen.

I was fortunate enough that my rifle functioned 100%, but I was hit with some other problems at 300 yards during the rapid fire segment of the match.

In this portion, you have only 70 seconds to fire ten shots for score. You start from standing with two rounds under a closed bolt. You must jump down and chamber a round, fire both, and then reload with eight rounds and fire those. While that doesn’t sound challenging, I can assure you that you’ve never felt a faster 70 seconds go by in your life. The author’s gear on match day. Wagons, baby strollers, and custom carts are all over Camp Perry on match day. (Josh Wayner for TTAG)

I shot an excellent group, with all shots dropping into about 2.5 inches at 300 yards…but the group was directly low of center in the eight and nine rings. I was off in my elevation despite firing hundreds of rounds in practice.

I was frustrated by this, but it was understandable. My local range is set up in meters, which means that my drop at those ranges will never be exactly what it is at Camp Perry. There are other factors, but I simply didn’t have the right elevation despite chronographing tons of ammo and putting it through a great ballistic program.

As disappointing as that was, I was happy with the group and pleased that I had shot well under stress. A competitor takes aim at 200 yards. (Josh Wayner for TTAG)

The next segment was 600 yard prone slow fire. This was by far the most challenging part of the match. Contrary to popular belief, a 4x scope is plenty at 600 yards and I had a nice, clean view and was very stable. Even though I was mechanically sound, though, the environment was anything but.

A large storm began to blow in and the wind at the range suddenly picked up. There were constant gusts exceeding 35mph and the effect was noticeable. I squeezed off my first shots when the wind was calm, and I had to make only minor adjustments for elevation that echoed my 300 yard performance. Then the wind hit and I had two clean misses.

The wind blew my 77gr bullets completely off target. Not just off paper, but completely off the target. I had to watch the flags and ended up holding almost two mils into the wind to hit center.

I had a spread of shots across the target. All of them were dead on for elevation, but left-to-right was…problematic. Most shooters on the line voiced similar concerns and I heard shooters all up and down calling out wind in an attempt to help each other. Reading the wind is very important in this game.

My performance was good overall for a first-timer. I went in with a rifle I built from parts and fired factory ammo and was indeed competitive.

I didn’t win the match, but that was never the goal. I wanted to see if I could actually put forth a good performance in a sport that I had never shot in before and I would say I accomplished that. The line at Camp Perry during the President’s 100 was extremely diverse. This is not a sport just for old white guys as the media might have you believe. Guns are for everyone and marksmanship should be a universal skill.

I talked to some unique shooters, in particular a number of young women. Why young women? Although it may seem like a novelty, there was a significant number of them on the line, many younger than eighteen. The involvement of girls in this sport is huge as it has increased significantly in recent years and shows just how widely accepted not just the AR rifle is nationally, but how the rifle and 5.56mm cartridge allows an even field between diverse groups of people. Sixteen-year-old Sydney Files of Birmingham, Alabama shot in her third President’s 100 match and was on the target next to me. Her grandfather got her into the shooting sports when she was younger.

She was competing with a rifle with iron sights and reloaded ammunition. She told me that she enjoys the atmosphere of the matches and has seen a rise in participation from women and girls. She plans on joining the Air Force to fly, but also wants to get on a military rifle team. Madison Rovelli, 17, is the team captain of the Arizona Scorpions Junior High Power Rifle Team. She found out about competitive shooting from a random flier at a local club at thirteen and started with Hi-Power and smallbore. She now leads a team of seven, the youngest 12 and the oldest 18.

She enjoys that the competitive shooting sports build leadership, camaraderie, and responsibility. This was her fourth year at Camp Perry. She shot 77gr loads at 200 and 300 yards and 80gr loads at 600. The Arizona team also teaches handloading and they’re sponsored by Sierra bullets, Hodgdon powder, and other companies. Cameron, 17, and her rifle. Note that none of the young women pictured here used an adjustable stock, despite all of them being quite petite. (Josh Wayner for TTAG)

Cameron, 17, of Fredericksburg, Virginia shot in her fifth President’s 100 match this year. She started at 12 with air rifle and then went straight to service rifle.

She and her dad shoot in several matches during the week they are at Camp Perry. Like many of the other girls, she shoots iron sights. She is not on a team and instead comes to have fun. She said that she enjoys the good time and friendly people at Camp Perry every year. 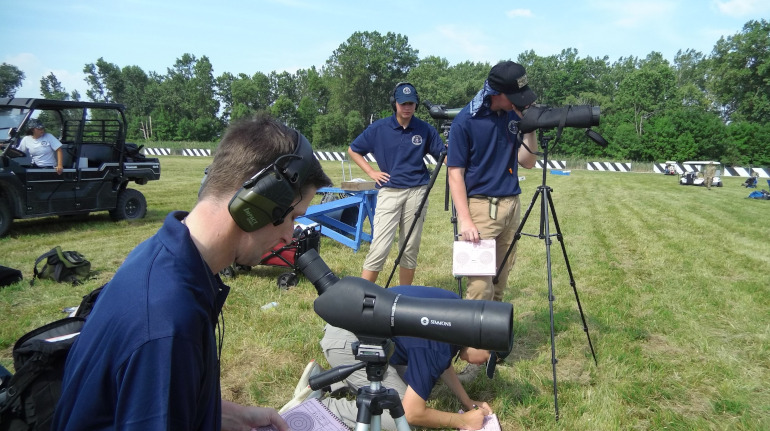 US Naval Sea Corps cadets spot for their teammates. (Josh Wayner for TTAG)

There are other youth teams I saw there as well that train both boys and girls. The US Naval Sea Cadet Corps brings kids to the matches to train them in teamwork. This is a Navy-chartered organization that has participated in the matches since 2010. They shoot in matches all week and have instructors that include SEALs and other Naval officers.

The matches at Camp Perry are for everyone and, if you are like me, you can get a great deal out of your experience. Thanks to some rule changes at the CMP, you have lots of options in gear and ammo. I enjoy that there is so much diversity in equipment and in the people you meet on the line.

Camp Perry allows you to squad up with some of the finest people from this beautiful country. You never know just who will be with you on the line and that makes it even more fun.

The ‘Do Something’ Disease