The Ruger Mini-14 and Mini Thirty rifles have been in production in one form or fashion since the early 1970s. Being a fan of the platform, I’ve seen a lot of gimmicky accessories for both rifles over the years. But after going through just about all of them at some point, here’s a good selection of items that are actually worth a damn to add to your rifle.

The Accu-Strut is a clamp-on barrel device that dampens barrel vibrations, a principal cause of inaccuracy. It will reduce group sizes 50-75% for most older rifles with a straight profile barrel and up to 33% for newer, tapered barrels. It also helps prevent vertical “stringing” with a hot barrel.

All-steel construction with easy click adjustments for both elevation and windage, and a standard .062 aperture. This is a quality upgrade and replaces the fragile fold-down aperture on pre-2005 Ranch Rifles. It also adds adjustment ease to the 580 series produced from 2005 to present.

GG&G of Arizona makes, in my opinion, one of the best mini red dot mounts out there. It can accommodate optics like the JPoint, Doctor, Burris FastFire, Leupold Delta Point, and the Trijicon Red Dot (non-RMR). GG&G will fit all Mini-14 and Mini Thirty Ranch Rifle models. Additionally, there is a relief cut beneath the rail for unimpeded cartridge ejection.

The UltiMAK optic mount is a forward, low mounting rail configuration with the enhanced versatility of a standard mounting rail. Since the UltiMAK clamps directly to the barrel and doesn’t interface with the stock in any way, it fits with any aftermarket Mini-14 stocks – wood or synthetic, fixed, collapsible, or folding. It gives the shooter the option of using either a low-profile red dot or a forward mounted scout-type scope.

The Arms Room flashlight mount attaches to the factory gas block and allows a small weapon light like a Streamlight TLR-1 or Insight M3/M6 LED to be mounted in an out-of-the-way but useful position.

This is an excellent 6-position folding replacement stock. You can choose to use or remove the pistol grip, and you also get a nice upgrade to your recoil management. Long story short, folding stocks and Minis are made for each other. If it’s legal in your state and you don’t have one, you’re missing out. 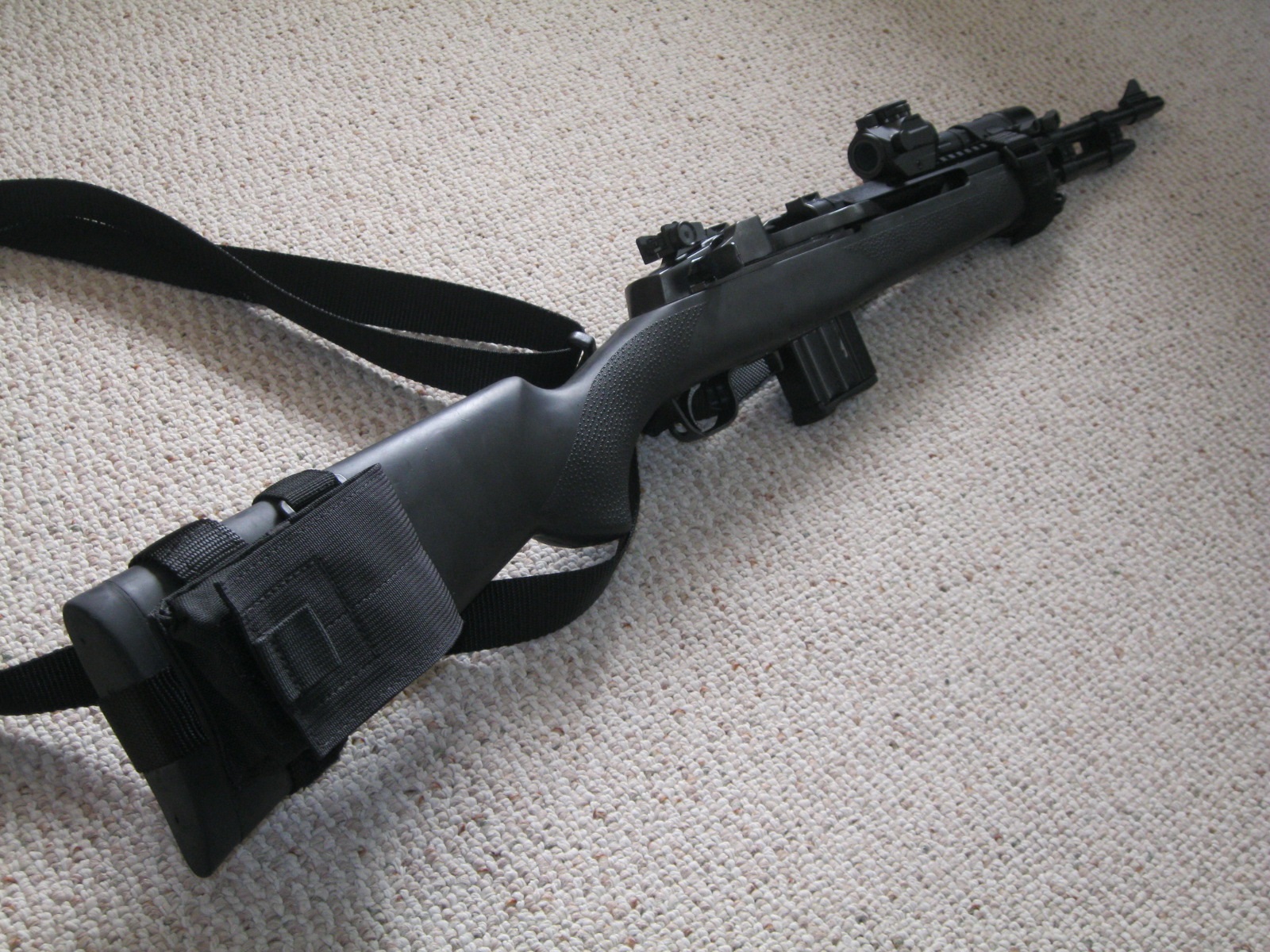 The Specter Gear Mini-14 Buttstock Magazine Pouch holds one spare 5.56mm 20 round magazine on the offside of the stock. The pouch is easily attached to the rear adapter of any of Specter Gear’s two- or three-point tactical slings. The sling-and-pouch combo gives a solid stock Mini-14 a modern M1 Carbine appeal.

A replacement front sight and flash hider combo from Choate; this gives older Mini-14s and current production Ranch Models with the classic, rugged M1 Carbine-style front sight and a useful flash hider. Why a flash hider? Because Bill Clinton and Dianne Feinstein don’t want us to have them.

Magazines for the Mini series of rifles are hit or miss, and mostly miss. But Thermold has been making aftermarket polymer magazines since before the 1994 Clinton AWB. Their magazines work and work very well, especially since they’re one of the only aftermarket manufacturers right now making both Mini-14 and Mini Thirty mags.

An equally functional, less expensive option is Tapco. While their first generation version had issues, The Gen II mags are good to go.

Accuracy Systems offers an extended magazine release paddle that makes mag changed easier and faster. Just like the AK and Galil, Mini-14 and Thirty magazines are the “rock in” type and the extended release paddle makes it much easier.

Sadly, Butler Creek recently ended production of their folding stock. I have one and it’s fantastic. Solid, rugged, and well-made. But they’re still out there, new in box if you look around. Photography done by A. Valdes

The Second Sight series of Aimtech mounting systems for modern rifles is a no-nonsense, no-frill mounts are made of a solid bar of heat treated aluminum which has been precisely fitted Ruger Mini Series. Made for a number of rifles, it allows optics to be added while still being able to use the factory iron sights.

Back in the 1980s, Falcon Arms and Ramline made a folding stock that was as good as the factory Ruger made stock. Same locking design and the only different was it used standard AR-15 pistol grips. So it actually has something the factory folder doesn’t have.

Author’s Note: Ruger named the 7.62x39mm rifle the Mini Thirty. They did not use numerals in the name of the rifle…so while the 5.56 rifle is the Mini-14, the larger caliber version is not the Mini-30.

This article was originally published in 2018.