The Walther CCP pistol has become one of the most popular concealed carry pistols among many gun enthusiasts. Walther recently improved this platform when they introduced the CCP M2, which was received exceptionally well among the concealed carry community. Until earlier this year, the CCP M2 was only available in 9mm. Now this highly sought-after gun is also chambered in .380 ACP.

I have so much respect for gun manufacturers that truly listen to customer needs and work hard to meet them. Walther is definitely one of these companies. Taking the time to expand upon the CCP with the CCP M2, and going even further with the CCP M2 .380, Walther has developed a line of pistols housing the same desirable traits, but giving the consumer options to meet their individual needs and preferences. For concealed carry advocates, having options is crucial. The gun we carry very much becomes a part of us; it’s personal. Engineering a great pistol like the CCP M2, then giving the option of 9mm or .380 ACP, is a brilliant move by Walther, one that puts the customer first.

The CCP M2 became popular for many reasons. In addition to being an easily concealable and comfortable carry gun, it’s also shoots smoothly and has a well-engineered, easy disassembly process. Among fans of 9mm guns this has been a great option. There are those, however, who prefer .380 ACP. This cartridge can perform well for those who prefer a bit softer recoil. You’ve most likely heard someone at one time or another tell you, “.380’s are really snappy!” That entirely depends upon the gun.

The felt recoil of the .380 ACP cartridge is dependent upon the frame of the gun. Enabling less felt recoil or “softer recoil” is possible if the gun has a well-made frame. This cartridge in a frame that is cheaply designed will more than likely prove to be a very snappy round. I was thrilled to have the chance to test the Walther CCP M2 .380 while at the Athlon Outdoors Rendezvous to see how it would perform. I wasn’t surprised to find that this gun was indeed a smooth shooting pistol with softer, less felt recoil. The Walther CCP M2 .380 is a very well-engineered gun to say the least.

One of the first things I look for and notice in a gun is the trigger. This gun has a crisp, light trigger with a pull of approximately 5.5 pounds, with a short 0.27-inch trigger travel and a wonderfully short reset. This, combined with the low-profile, three-dot polymer sights, allowed quick target acquisition and fast follow-up shots, while maintaining great groups. Although I did not have the time or the ammunition to spend a few hours range testing this pistol as I normally would, I did get enough time at this event to really get a good feel for this new .380. Smooth consistency in firing is what truly stood out to me. The CCP M2 .380 is much smoother than many guns in this same class.

The CCP M2 .380 is an iteration of the original Walther CCP, which was designed for concealed carry (Concealed Carry Pistol). Obviously, I wanted to really go over specific details that make this gun a great choice for an EDC (Everyday Carry) pistol. This gun boasts the Ergonomic Walther Grip with a Non-Slip, Hi-Grip Surface. I could definitely feel the difference as I was shooting in slightly wet, snowy weather. Grip is very important when it comes to a concealed carry gun, as you can never guarantee what the elements may be if you need to utilize it. 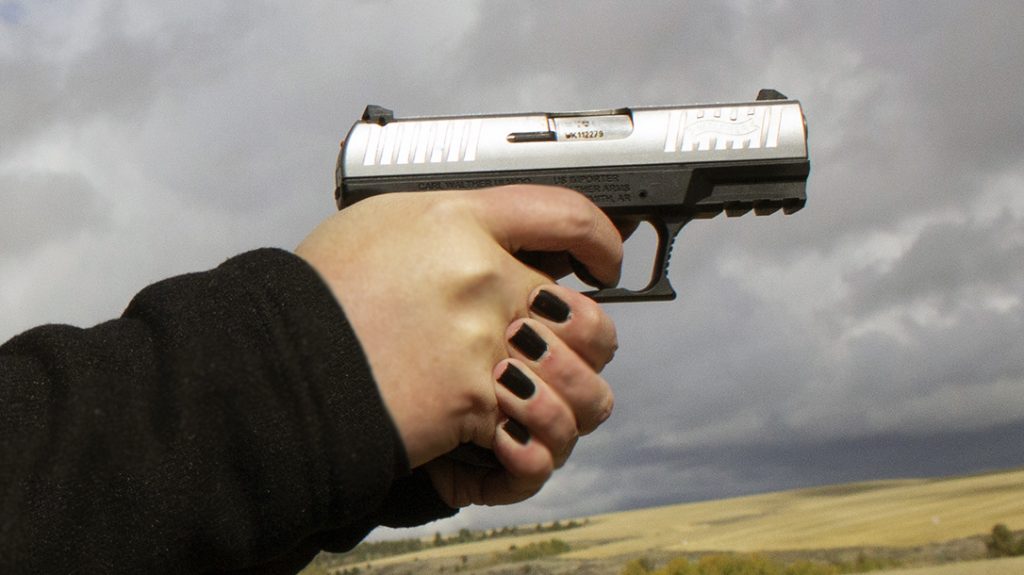 Complimenting the grip are the front and rear non-slip slide serrations. The thumb safety is conveniently positioned for ease of use and accessibility, and there is also an additional internal firing pin safety, which promotes safety in carrying. Other notable features of the CCP M2 .380 would be the red visual cocking indicator, ambidextrous magazine release positioned for thumb operation and an easy cocking slide that locks back on an empty magazine.

The CCP M2 .380 gives two options for color with the slide, black with Cerakote coating or silver stainless. The MIL-STD-1913 Picatinny accessory mounting rail allows the use of lights, lasers or any other tactical devices you would utilize to fit your needs. It ships with two, eight-round, single-stack magazines, and like the others in the CCP family, it offers the tool-less take down.

The Walther CCP M2 .380, in my opinion, is a wonderful choice for an EDC gun. Personally, I tend to favor the 9mm, but wouldn’t hesitate to utilize this gun in the slightest. The CCP and the CCP M2 have proven to be great guns for the concealed carry arena, and with the addition of this new .380, it’s all come full circle. Walther is a reliable, trustworthy company that not only brings great firearms to the market, but choices as well. If you’re a fan of .380s you’re going to love this gun. If you’ve never quite liked what’s been deemed a “snappy” round, try this gun out, it just might change your mind.

The Jungle Prince, Chapter 3: A House in Bradford, Yorkshire

Florida Man Shoots Robber Who Pointed an AK-47 At Him