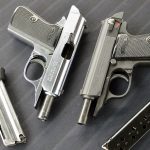 In the wake of three high profile assassinations (President John Kennedy, Robert Kennedy and Martin Luther King) the GCA of 1968 became law. Among other things, it sought to halt the importation of inexpensive pocket pistols which were perceived by Congress as the weapons of America’s criminal element. The finely made and fairly expensive PPK was just barely too light in weight to qualify for importation under the new criteria. Naturally, demand for the PPK only increased.

Before production arrangements to build the gun in America were made, an immediate solution for American consumers was found. By combining the short slide and barrel of the PPK with the slightly longer, and heavier, grip frame of the PP, the weight hurdle was overcome. The new hybrid was the PPK/s, and it became immensely popular in its own right because the slightly longer grip frame made it easy to shoot and allowed for an extra round in the magazine. The only downside was that it was also slightly harder to conceal. The PPK was scant 3.8 inches tall, and PPK/s a half-inch taller at 4.3 inches. Overall length remained the same at 6.1 inches long since both guns used an identical slide and 3.3-inch barrel.

The weight difference between a contemporary PPK and PPK/s is 1.5 ounces, slightly more than it was originally. The extra weight comes from a design change eventually adopted for the PPK/s grip frame to address the gun’s one perceived flaw. All the old PP and PPK models could deliver a nasty, blood-drawing, slide bite to the shooter’s hand if gripped the wrong way, and even if gripped the right way if you had particularly meaty hands or used hot ammo. To minimize the occurrence of slide bite, the grip frame’s bearvertail was extended to keep the web of hand between thumb and forefinger down below the recoiling slide. It worked well, but some disliked it because they felt it increased the likelihood of snagging the pistol when drawing. 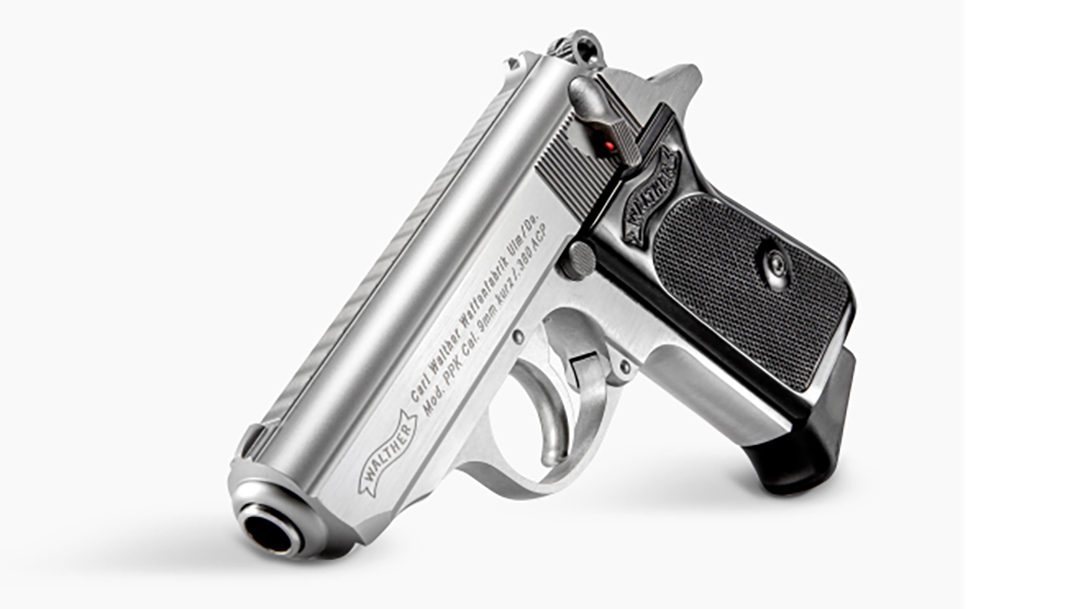 I had a chance to shoot Walther’s PPK series pistols at the 2019 Athlon Outdoors Rendezvous in its blued and stainless steel .380 ACP forms, as well as the zinc-alloy .22 LR version that comes in a nickel plated or black finish. They showed uniformly excellent workmanship. Walther built all the guns at its Fort Smith factory in Arkansas from German and U.S. made parts. The .380 ACP PPK has a six-round magazine and the PPK/s has a seven-round magazine. The PPK/s 22 LR has a 10-round magazine, a dovetailed rear sight adjustable for windage, and a removable, pinned front sight. The .22 is also slightly taller and lighter than either of the centerfire versions. It weighs only 20 ounces, but is 4.9 inches tall; 0.6 inches taller than the standard .380 ACP PPK/s and 0.9 inches taller than the PPK.

The first round, double-action trigger pull on the centerfire models is 13.4 pounds over a smooth half-inch of travel before let-off. The single-action pull is 6.1 pounds with 0.2-inch travel before let-off. The .22LR model has a heavier double-action pull of 17.5 pounds but the same action pull. A lot of Walther fans can’t seem to forgive the 17.5-pound first shot, but the .22LR is a joy to shoot, runs well with zippy ammo, and is a great practice gun if you intend to carry a .380 or for self-defense.

The .22LR PPK/s has two more noteworthy features. First it maintains the original PP and PPK small beavertail, so those with meaty hands beware. Second, a threaded barrel (metric M8 X .75) comes standard. It features a thread protector fitted on the muzzle. It utilizes two narrow slots milled on opposite sides for removal. The appropriate wrench comes included with the pistol. Since the front sight is pinned in, you can replace it with a taller one when shooting with a suppressor.

Walther caught some criticism for their use of a zinc-alloy frame on the current .22LR PPK/s, but other manufacturers have already demonstrated the material has ample strength for small caliber firearms. Zinc-alloy castings require little machining to get to finished dimensions and offer considerable savings in manufacture, which Walther passed on to the consumer. The zinc-alloy .22s are less than half the cost of the steel .380s and both have a life-time warranty.

The post How the Walther PPK/s Pistol Was Born From a Failed Import Test appeared first on Personal Defense World.

Family Member of Americans Murdered in Mexico: Americans Need to Fight to Keep Their Guns

After the NRA, Organizing to Fight in Your State

After the NRA, Organizing to Fight in Your State