Rock Island Armory’s VR lineup of shotguns is a growing. I reviewed the VRBP-100 just a short while back, and while I liked it, I didn’t love it. One VR model I really do love, though, is the VR80.

The Armscor RIA VR80 is the second generation of their AR-style magazine-fed shotguns. It’s a magazine-fed, gas-operated, semi-automatic shotgun made in Turkey and imported by RIA. What makes it stand out was the wise decision to outfit it pretty much like a modern AR-15 with all the bells and whistles.

This includes a thin, metal M-LOK-compatible handguard, flip-up iron sights, lots of optics space, and a lower profile design. The stock and pistol grip are a one-piece thumbhole style, but they don’t have to be. The Armscor VR80’s stock and grip can be swapped with standard milspec AR parts. (Travis Pike for TTAG) The barrel is 20 inches long and threaded for the Beretta MobilChoke system. At the end is a barrel shroud that sort of looks like a suppressor. It’s just there for looks. The VR80’s lower receiver is made of 7075 T6 aluminum and has AR-style controls. (Travis Pike for TTAG)

The ergonomics also closely mimic that of the AR-15. The safety is ambidextrous and provides instant, tactile feedback. The throw between safe and fire is nice and short. The magazine release is positioned in an AR-like place but is bigger. It’s actually massive and activating it is simple.

The bolt release is the same deal. It’s placed in an AR-like spot on the receiver, but it’s massive. Everything functions as intended. It all glides, clicks, and pops just like an AR. There was never a moment where one of the controls become stuck, hard to push, or awkward in any way. Look at that magazine release (Travis Pike for TTAG)

While you can swap the stock and pistol grip for an adjustable AR stock and an AR pistol grip I can’t say there are any problems with the standard thumbhole stock and grip. Sure, it may be ugly to some, but it’s very functional and offers no significant issues.

The length of pull is just right for me, so that means it might be a little long for some shooters. I’m a big guy, and I find the M16A2 fixed stock comfortable.

Magazines do not drop free and need some five finger encouragement to get them out of the way. They load quickly enough, and there isn’t any extra effort required to get a fully-loaded mag to seat on a closed bolt.

The optional 9-round magazine is the perfect companion to this gun. It gives excellent capacity with good balance and doesn’t look like a boomerang sticking out from the bottom of your weapon. The thin handguard is also comfortable and functional. It’s easy to grip and never gets too hot to hold in my experience.

The VRBP 100 exhibited a lot of recoil for a 12 gauge, but the VR 80 is much more comfortable to shoot. It’s a gas-operated gun, and I’m betting it’s a bit over-gassed. It’s no Benelli, but it’s comfortable. Even with heavy loads, it’s a gun I can enjoy shooting all day long. It’s still a 12 gauge shotgun, so after a few hundred rounds you’ll feel it. But the VR80 won’t beat you up. 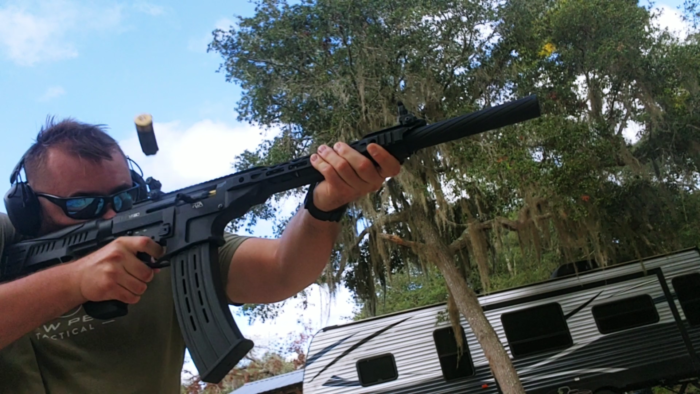 Do you shoot Winchester RazorBack rounds? They are eight-pellet 00 buck at 1,450 feet per second. These rounds are quite potent, and I’d advise holding the trigger down until the recoil is finished with high-velocity rounds. If not, the trigger guard might bite your trigger finger. It happened to me a few times with this high-velocity loads.

Ammo isn’t necessarily cheap, especially 12-gauge ammo, so I typically shoot the cheapest birdshot I can find. I buy game and sporting loads in bulk from Estate and Federal. This stuff can be a bit light, but the VR 80 has no problems cycling it. This is where being over-gassed can be a blessing. It cycles the cheap stuff without issue…as it must, in my opinion.

The Rock Island VR80 is a gun I can have fun with, and cheap ammo is the best ammo for having fun. I can take out a box of 100 rounds and dump it all in an afternoon without having to worry about jams, double feeds, or failures. Speaking of dumping ammo, this gun makes it a blast to do so.

To me, semi-auto shotguns are an absolute blast to shoot, and the Armscor Rock Island Armory VR80 is no different. Dropping nine rounds of 12 gauge in just a few seconds loads of fun. One of my favorite games to play is setting up various clay pigeons around the berm and trying to see how fast I can break all of them.

Sometimes I set them up in a row and other times in a zig-zag formation. Hit the big button on my timer and see how fast I can turn clay pigeons into clay dust. The VR80 is perfectly suited for that. This gun runs just fine with buckshot loads as well. It can handle 2¾ as well as 3-inch shells.

I fired dozens of cheap Rio 00 buckshot rounds and an absolute ton of Olin Corp military-grade buckshot without a hiccup. The VR 80 even cycled the Federal LE Flite Control reduced recoil loads without issue.

The VR80 uses flip-up AR-style sights, and they’re okay. I don’t really see a purpose for such fancy sights on a shotgun, especially the smaller peep sights. I prefer more open sights for quicker shots. I imagine they’d work perfectly for slugs. There is plenty of Picatinny room to toss on an old red dot if you so choose. Purpose-wise, the VR80 could be a home defense gun. It’s certainly proven to be reliable enough. I’ve heard of plastic shotgun rounds deforming when kept in box magazines, but have never experienced it.

I’d imagine this could be a fun gun for 3-gun in an open class division. In my state, the 5-round magazines would make it legal for hunting deer, but not for birds.

The VR80 is bit different than Pappy’s trusty 870, but it would kill deer and hogs just the same. To me, it’s an very enjoyable gun and one I enjoy shooting, and that’s enough for me.

Ratings (Out of five stars):

Reliability * * * * *
The VR80 cycled everything from day one. The manual advised a break-in period, but the shotgun didn’t seem to need it. It was a loaner so may have already been broken in, but appeared to be brand new when received.

Accuracy * * * * *
It’s a shotgun with sights, so it’s plenty accurate. Beretta MobilChoke choke tubes can tighten things up and give you longer range performance. Flite Control buckshot proved to be well-suited for 50-yard shots on a man-sized target.

Ergonomics * * * *
The AR-15 style ergonomics are rock-solid for most shooters. The only downside is the trigger guard biting on higher velocity rounds, and the LOP may be a little long with the factory stock for some.

Customize It * * * *
I will give it credit. You can swap chokes, add things to the rail, toss an optic on, swap the stock and pistol grip and that’s not bad for a proprietary weapon.

Overall * * * *
The mag fed VR80 is a funny semi-automatic shotgun. The design is robust, and the ergonomics are surprisingly good for a Turkish-made shotgun at a very reasonable price. I think Rock Island has a winner here for competition, hunting or just plain fun. The VR80 is a blast to shoot, and remarkably affordable.

A Hunt That’s More Than Just a Hunt