Today we are going to jump into the meat and the potatoes of a new(ish) offering from SIG SAUER: the P320 XCompact. This is an extremely impressive gun and, in my opinion, is the new standard by which all compact handguns are judged.

There may to be some soreness in the comments here when I talk about the XCompact vs. the GLOCK 19 because this is going to be a head-to-head comparison. That’s somewhat unavoidable, as the G19 has been a dominant compact 9mm Luger pistol for decades now.

There is simply no comparison between a GLOCK 43, 43X, or 48, Kahr, Ruger, Kimber, or really anything next to a P365 when size, weight, capacity, and modularity are concerned. The XCompact does have competition… for now. That reason is why I wanted to spend some time with it and let my opinion form as a result.

The P320 XCompact is a member of the modular P320 family. Like other P320 models the XCompact consists of a stainless steel chassis that bears the serial number. The chassis in the X Compact is exactly the same the one found other P320 pistols and can be readily dropped into any other grip module and slide combination.

That means you can rebuild it as you like and return it back to its original configuration in a minute or less with no specialized tools.

The pistol comes standard with SIG Xray3 night sights. Since we live in an age when many other guns have what can only be described passable sights, it’s refreshing that a significant portion of SIG SAUER’s product lineup comes with extremely durable, useful night sights.

SIG SAUER’s P320 XCompact – is it the new standard for compact handguns? (Josh Wayner for TTAG)

The rear sight is removable and is part of a SIGLITE slide plate assembly. The ability to add optics has become almost a requirement for many end users these days, but that often comes at a premium. It’s standard on the XCompact. The lines of the slide plate are clean and blend well with no unsightly screws in the top of the assembly. The screws are hidden underneath the frame.

I have heard that some people dislike the fact that the rear sight comes off when you mount an optic. The Tactical Polo Bros love to throw this out a negative. In real world use for the vast majority of gun owners, it is in no way relevant considering that there are in fact slide plates that can be purchased that include a rear sight.

Being a carry-sized gun, I would probably not opt for a red dot as I have rarely used one and I don’t fully trust them in defensive situations. Still, I like that it’s an option. I see the ability to mount a red dot as a major plus for suppressor owners who would otherwise have to opt for a set of taller sights at additional expense.

The P320 XCompact’s has a short 3.6″ barrel. That’s actually shorter than the barrel on the P365 XL, which itself is a very small gun to begin with.

The gun is the same thickness as a standard P320 at 1.3 inches. The outward appearance is that of a somewhat chunky gun, but looks can be deceiving.

Overall length is just 7 inches and the unloaded weight is 25 ounces. These stats put it on the smaller end of the spectrum of comparable compact guns despite having more steel and more robust parts than many competitors. Simple disassembly. Just drop the magazine, lock the slide to the rear, and rotate the takedown lever. You can pull the lever all the way out to remove the chassis from the grip. (Josh Wayner for TTAG)

The XCompact has one of the best grips of any modern polymer framed compact on the market. Not only is it probably the most ergonomic by direct comparison, but it is also among the most aesthetically pleasing. Putting your hand on this grip is an eye-opening experience into just how comfortable a gun can be.

The trigger guard is spacious, but has a generous undercut that allows the hand to sit high on the frame. That translates to greater comfort while firing, marginally less felt recoil and no slippage of the hand you get with slab-sided guns.

I tested the P320 XCompact with just under 2,500 rounds of various 9mm rounds. Accuracy shown is the average of three five-shot groups at 15 yards. Velocity is the average of ten rounds fired over an Oehler 35P chronograph five feet from the muzzle.

I experienced no failures to feed or fire in the course of my testing and I ran it hard and dirty. I didn’t give this gun a break because I knew what it was up against. I wasn’t especially nice to the pistol…it was subjected to dust, sand, and other debris at the range.

I fired at both paper and steel and it never missed a beat. I never cleaned it out of the box and never even so much as wiped it down after putting box after box of ammo through it. The Xcompact was an absolute beast and just kept going and going.

The pistol delivered exceptionally mild recoil and was not at all snappy. While I don’t have the space here to talk about each round tested, all were great and I’d heartily recommend them.

I fired a range of bullet weights through the XCompact in both standard and +P offerings. Overall, I found it performed best with SIG SAUER 365 loads, where it was just plain fun to shoot.

It handled very well and recoil with the 365 loads was bouncy and light, not sharp or dramatic. (I tested this ammo for TTAG last year) 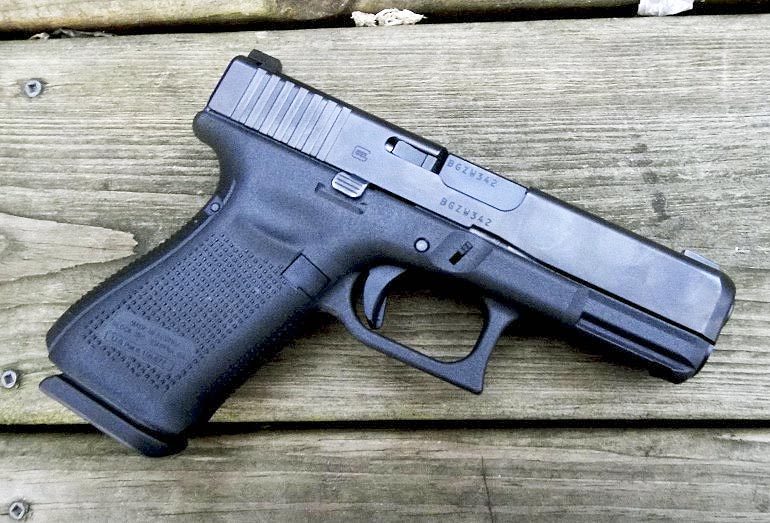 So now is the time that we will get down and dirty. This gun has lots of competitor on the market, but one that stands out in many gun buyers’ minds. Despite the existence of many very good 15+1 9mm compacts like the Smith & Wesson M&P 2.0 and FN 509, the P320 XCompact’s primary rival is the GLOCK 19.

GLOCK has made evolutionary changes to its pistols over time and has a wide and deep user base that’s been built over decades. They have a very successful formula for the majority of their handguns and they don’t really stray from that.

The modular P320 platform, was more of a revolutionary change in SIG’s lineup. One that’s won over a lot of gun buyers…the military among them. It has a lot of updated features that gun buyers look for in a duty or defensive carry handgun.

The P320 XCompact is what a modern compact 9mm should be. The standard set by the G19, that being a reliable 15+1 pistol suitable for concealed carry, recreational, and general use, is a good one that must be respected. The G19 has been called “peak handgun” by some writers, and I tend to agree that its feature set is excellent.

But in my opinion, the P320 XCompact exceeds the G19 with its ergonomics and modularity. Ergonomics-‘R’-Us just opened for business. The XCompact grip is an amazingly well designed and comfortable addition to the P320 feature set. (Josh Wayner for TTAG)

Not only is the XCompact slightly smaller, but it’s far better balanced in the hand and points more naturally than the G19. Many shooters I know will point out that it has a higher bore axis. Folks, it’s not that high in reality.

If you’re used to the P226 and 1911, you’ll never notice a difference. If you compare it directly to the G19, it is slightly higher, but only marginally so, and the difference isn’t enough to be a disadvantage.

Then there are the ergonomics. I’m willing to say that most shooters will consider the grip on the XCompact to be much better than the G19′. The G19, and most GLOCK pistols for that matter, have always struggled ergonomically in the eyes of many shooters due to their grip angle. I suggest you go to your local gun store and hold them both, side-by-side. The difference is quite apparent.

The more rounded shape and contour of the XCompact grip is also far more organic and comfortable without the torquing found on the flat-sided G19. The G19 grip cutout…which isn’t popular with all shooters. (Josh Wayner for TTAG)

The G19’s grip can only be adjusted in thickness front-to-back with the provided backstrap options. The XCompact is compatible with a full line of ergonomically designed grip modules.

The trigger on the XCompact is also superior to that of even the Gen5 G19. Not only is it crisper with little to no stacking or mush, it breaks and resets more cleanly. The reset on the XCompact is a hair longer than I would like, but that’s my only complaint and it’s a minor one.

Then there are the sights. GLOCK doesn’t have a lot of devoted fans of its standard sights.  The XCompact ships with night sights at close to the same price.

Since weight and magazine capacity are identical for all practical purposes, I’ll call that a tie. We can debate the merits of (steel lined) polymer vs. steel magazines, but there is clear advantage to the wide availability of G19 aftermarket mags. How big an advantage that is depends on the individual shooter’s needs. The barrel length comparison is interesting. I have always wondered just why GLOCK never put a G26 slide on a G19 frame. Instead they did the G19 slide on a G17 with the popular 19X.

Some like the short frame/long slide thing but I find it too Tactical Polo Guy for me. S&W did the right thing, in my opinion, by putting a 3.6″ slide and barrel on the M&P 2.0 Compact.  SIG decision to go the same way is a good move as there is virtually no loss in velocity and accuracy with a 3.6 inch barrel. Trimming that half-inch off the front end makes it feel like a different gun.

Overall the SIG SAUER P320 XCompact is an exceptional gun. I’ve reviewed both and both are excellent choices. That said, the XCompact outperformed the G19 in most categories by which I measure a modern gun.

The XCompact is, on all points, a next-gen gun and is arguably the best in class. That’s a big deal considering that the 15+1 9mm class has so many worthy competitors. Long live the new king.

Accuracy * * * * *
The XCompact was an absolute hammer at the range. The on-paper accuracy was spectacular for a compact gun.

Ergonomics * * * * *
SIG really went for the gold on how this gun feels in the hand. It is, without a doubt, the most ergonomic compact pistol on the market today.

Customize This * * * * *
There is no other carry sized 9mm that even comes close to the P320 platform’s modularity and adaptability. You can reconfigure it just about any way you want.

Aesthetics * * * *
No modern plastic gun is a beauty queen, but the lines of the XCompact are modern and clean. That flat trigger gives it a state-of-the-art look.

Overall * * * * *
SIG deliver a fully customizable pistol with the P320 XCompact. It’s optics-ready, has a great trigger, and is very accurate. I think that SIG has reset the standard for the 15+1 9mm pistol here.