“If the court had properly interpreted the Second Amendment, the Court would have said that amendment was very important when the nation was new,” she said. “It gave a qualified right to keep and bear arms, but it was for one purpose only — and that was the purpose of having militiamen who were able to fight to preserve the nation.””

On 21 December of 2018, Justice Ruth Bader Ginsburg had the lower lobe of her left lung removed because it contained two malignant cancer nodules.  From theatlantic.com:

On Friday, surgeons in New York removed the lower lobe of Justice Ruth Bader Ginsburg’s left lung. According to a statement from the Supreme Court, two nodules—which had been discovered in a CT scan after Ginsburg broke three ribs last month—were determined to be malignant.

Images before the surgery showed no evidence of cancer elsewhere in her body, and doctors at Memorial Sloan Kettering Cancer Center reported that there was “no evidence of any remaining disease” after the procedure. According to the statement, no further treatment is planned.

On 23 August, 2019, the Supreme Court released information indicating Justice Ginsburg had completed three weeks of radiation therapy to treat a tumor on her pancreas. This treatment occurred less than eight months after the surgery to remove a lobe of her lung.

Justice Ruth Bader Ginsburg today completed a three-week course of stereotactic ablative radiation therapy at Memorial Sloan Kettering Cancer Center in New York City. The focused radiation treatment began on August 5 and was administered on an outpatient basis to treat a tumor on her pancreas. The abnormality was first detected after a routine blood test in early July, and a biopsy performed on July 31 at Sloan Kettering confirmed a localized malignant tumor. As part of her treatment, a bile duct stent was placed. The Justice tolerated treatment well. She cancelled her annual summer visit to Santa Fe, but has otherwise maintained an active schedule. The tumor was treated definitively and there is no evidence of disease elsewhere in the body. Justice Ginsburg will continue to have periodic blood tests and scans. No further treatment is needed at this time.

Justice Ginsburg is old, but we cannot ignore her. She is one of nine votes on the Supreme Court. She is one of four that routinely and regularly vote to ignore parts of the Constitution they dislike, especially the Second Amendment. She should never have been nominated for an appellate court position, let alone the Supreme Court. She should never have been a judge. Her philosophic opinion, that she can ignore parts of the Constitution she wishes to, is the philosophic equivalent of no Constitution. 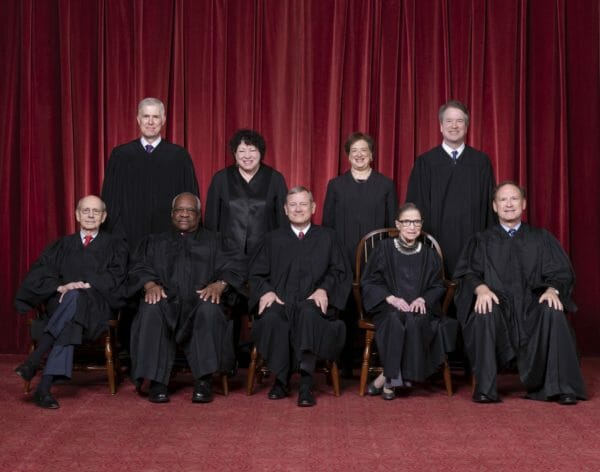 Second Amendment supporters need to be prepared for the insane flood of pressure from the Democrats and their party organs of what used to be mainstream media. If you thought the pressure on President Trump and the Republican Senators was insane when replacing Justice Kennedy with Justice Kavanaugh, expect it to be redoubled, tripled, quadrupled, when Justice Ginsburg’s replacement is being considered.

The Left will demand that a person of the same leftist, anti-Constitutional, anti-limited government, anti-Second Amendment philosophy be appointed in her place. Expect threats of civil war. Expect death threats. Expect marches of thousands of crazed leftists calling for violence.  Expect to see riots promoted in Democrat strongholds. Those have all been used already in an attempt to sway President Trump from upholding his duties as President of a Constitutional Republic. They will be tried again. They will not succeed. Expect more agent provocateurs to attempt to goad patriots to violence, as they did during the campaign of candidate Trump.  Expect false flag operations such as were done during the Trump campaign and later. They will not be successful if patriots pursue and expose the truth. The Left has shown itself to be the party of lies, deception, hatred, and false accusations.

Those tactics worked for decades, as the Left controlled the information flow in the United States. With talk radio, the Internet, social media, and a video recorder in the hands of the majority of citizens, the Left no longer controls the flow of information.

The Left has made clear they wish to destroy this country as it was founded and as it has existed as a Constitutional Republic of limited governmental power.

If Justice Ginsburg is replaced with an Originalist and Textualist justice, they will feel cornered. They will feel desperate. The party organs of the former main-stream media will not do anything to discourage extremism, hatred of the Republic, and yes, violence. I will not be surprised to see actual assassination attempts against Conservatives. They have already happened. Expect more. Be on your guard. Know the laws of self-defense in your state. Know how to operate your phone as a recording device. Today, the video recorder is as much a tool of freedom as is a pistol or rifle.

It could happen. I would not give odds on it.

Justice Ginsburg will die. We all will. She will likely die during the Presidency of Donald Trump. Be prepared. Know the Left will do anything to prevent an originalist, textualist justice from taking her place. They are desperate. Desperate people are dangerous.

The NRA Still Has Phones and New York Has Red Flags

A Beginner’s Guide to Muzzle Brakes

Washington State Gun Owners Under Siege, Can They Fight Back?