3 Ways to Improve the Reliability of Your 1911

The 1911 .45 ACP combat pistol, invented by John Moses Browning set the groundwork for most modern pistols. It’s a trusted combat handgun that has been used in more theaters of combat than any other weapon. It’s a popular choice for self-defense as a carry gun, especially for concealed carry due to its slim profile.

So why does it have a reputation for reliability issues? Despite its pedigree, and military service, the 1911 that you can buy from Les Baer, Wilson Combat, Kimber, STI or even Ruger, Remington and Springfield armory aren’t the same 1911 originally that was originally manufactured by Colt.

The small variations in design, assembly and craftsmanship can cause some issues. You’re less likely to run into these issues with the 1911s from higher-end makers, but here are three ways to improve the reliability of your 1911 pistol.

Magazines are a big deal for any gun, but particularly the 1911. Many malfunctions can be caused and remedied with this easily replaceable piece of equipment.

If you look at how a 1911 feeds ammo, you’ll notice that the cartridge itself does a lot of work. As it comes forward, the nose of the bullet hits the frame’s feed ramp and makes a sharp turn up.

As it continues to move forward, the feed lips on the magazine will release the rim of the cartridge allowing it to spring up under the extractor. This gets the round  mostly in line with the barrel as it’s then fully chambered.

Look at this in contrast to something like a GLOCK. GLOCKs have the cartridge more in line with the barrel from the get-go, so the slide pushes a round mostly straight in. The cartridge does less work so there are fewer opportunities for something to go wrong.

In the 1911 design, if the mag lips let go too early, hold on too long, or the magazine spring is too stiff or too weak, this whole process can be messed up.

Then there is magazine life. Some may work well initially, but due to poor design/materials/manufacture can wear out quickly. Wilson Combat, Tripps Research, and Chip McCormick are three magazine manufacturers that are known for their reliability.  If you are having feeding malfunctions in your 1911, pick up one of these makers’ magazines and see if that doesn’t solve the problem. 1911 with an internal extractor (Dan Z for TTAG

The extractor is probably the BIGGEST culprit for most malfunctions. It’s also one of the easiest things to fix since it doesn’t require any power tools.

Extractor tension is the first thing to look at. This is the amount of force the extractor grabs the case with. If the extractor has too much tension, the cartridge will have trouble getting under it, causing a stoppage. 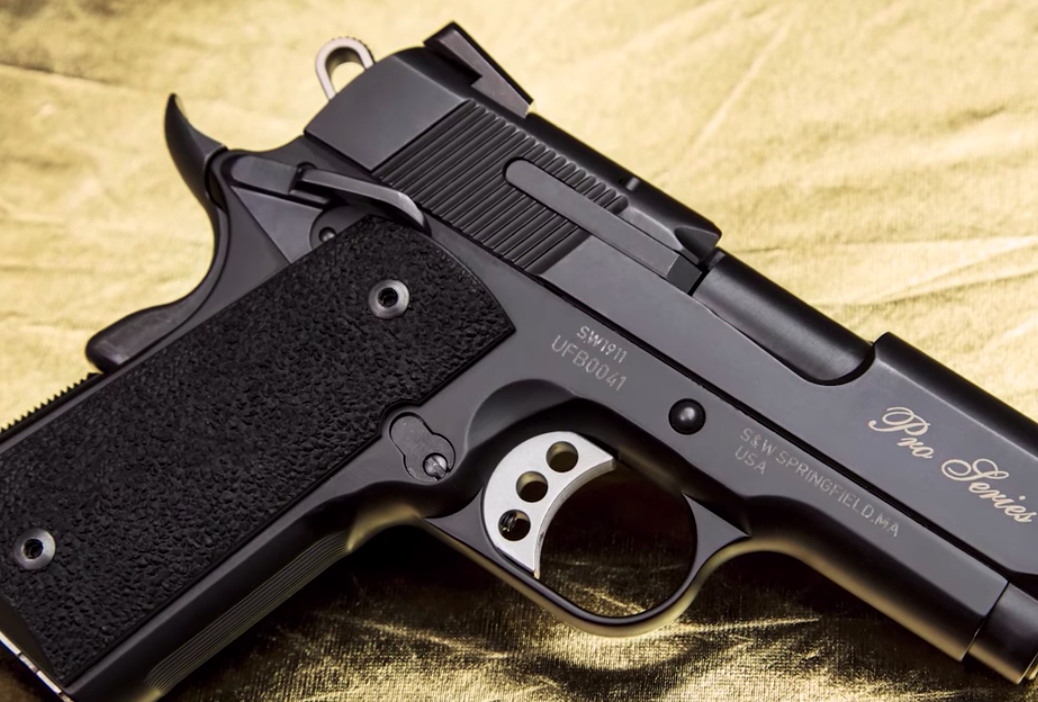 Adjusting the tension is all about feel. If you pass a case through the extractor, it should feel like it’s held there “magnetically.” You don’t want it to feel like a speed bump when you insert the case, but like moving a piece of metal past a magnet.

Another way to test for proper tension, and the way I prefer, is to place a cartridge under the extractor and give the slide a few shakes. The cartridge should fall out after 2-3 good shakes. This also requires some “feel” on your end since a “good shake” can’t really be measured. As long as the case doesn’t fall free from gravity alone, or require real effort to remove it, you should be good to go.

You can adjust the tension of the extractor by bending it. I like using the slide itself to make the adjustment, though there are plenty of other ways to do it. Bend towards the hook for more grab and away for less.  This video from Wilson Combat does a good job of illustrating this.

This is a light touch process. It really doesn’t take much effort to adjust the extractor’s tension. You may end up going back and forth between too much and too little a few times before finding the sweet spot. Be patient and be gentle.

Another thing to adjust on the extractor is the hook’s contour. You want the bottom edges to be rounded and smooth so the case is easily guided under the extractor. If the edges are sharp or too square they can snag the brass, even with proper tension.

Shaping with a small needle file and sanding to a high grit like 600 or higher will do. If you can, polish it.

All of the above pertains to feeding issues. If you’re having extraction or ejection issues then make sure the rake on the extractor hook is correct. It should be neutral or slightly positive.

A negative rake may allow the case to slip off the extractor before it is extracted or ejected. If the extractor has a negative rake, squaring it may solve the problem but it also may require a new extractor. If you’re not comfortable with adjusting the rake of your extractor hook, consult a competent gunsmith.

Check Your Throat and Feedramp This step requires a little gunsmithing, so a Dremel or rotary tool of some sort is required. Again, if you’re not comfortable doing this yourself, see a good gunsmith.

First, you want to properly throat your barrel. I recommend using a needle file or metal scraper for this step unless you are VERY confident in your Dremel skills.

Most 1911 barrels have limited throats. This creates hard corners and edges that are VERY good at snagging case mouths and bullets. You want to match the existing angle and carry it up so that edge is removed. Be VERY careful that you stay away from the opposing chamber wall, though…don’t scratch it.

Before sanding and polishing, check the barrel throat-to-feed ramp gap. There should be a gap between where the feed ramp ends and the throat starts. This gap should be roughly .031.

That can be tricky to measure, so don’t worry too much about whether you have “enough” gap and just make sure you have “some” gap. What you DON’T want to see is the throat lining up perfectly with the feed ramp. That can create a snag point for incoming cartridges as well as make it harder for cartridges to get up and in the chamber.

You can fix this by maintaining the existing angle on the throat and pushing it back a little. A “little” is the key word here. Too far and you can have unsupported brass.

Once fully throated and the gap is set, you then want to polish it to a mirror finish. This includes the feed ramp on the frame. Be sure to maintain the angles.

A great test to see if you were successful in your reliability improvement job is to feed an empty case. If your 1911 can feed an empty case, then wadcutters, hollowpoints, and ball ammunition should be no problem.

I want to point out again that some of what I described, like the throat work, is best left to a competent gunsmith. Even better, one who specializes in 1911s.

Messing with an extractor isn’t a big deal. It’s a cheap part that is easily replaced. Replacing a barrel, on the other hand, is not inexpensive. Outside of giving it a good polish, I don’t recommend hacking away at your barrel unless you’re prepared to buy a new one and have a gunsmith properly fit it.

Although these are the main things I would look at to improve a 1911’s reliability, lots of other things play a part in the end result. If the bushing and barrel fit are messed up, it won’t run right or be accurate. If a trigger job is botched, you’ll get hammer follow or just have a horrendous trigger pull.

The thumb safety needs to be properly fit otherwise it will put unnecessary pressure on the sear or allow the gun to fire even if the safety is engaged. The grip safety should be tuned so it disengages with minimum movement. You can drastically change the feel of the gun by playing with the mainspring weight, recoil spring weight and the angle of the firing pin stop plate.

That being said, if you have a gun built by a good gunsmith from high-quality parts you will have a handgun that’s as reliable as any other and SIGNIFICANTLY more accurate. I’ve gotten 1.5″ groups at 50 yards from a Ransom Rest. I’ve heard about 1911s doing 1-inch or better though I have yet to see it. If you don’t think that level of accuracy matters, then you’ve never been held responsible for every bullet you’ve fired.

The 1911 platform is still the king in the competitive world and a go-to weapon system for many professional gunfighters for a very good reason.

Here is a bonus tip for maintaining reliability — replace your recoil spring every 5000 rounds. You’ll be glad you did.

Matt Sandy is an Austin-based gunsmith who competes in both USPSA and PRC matches.

Being a Racist Is Easy Today

Ashes and Beyond: A Dying Wife’s Unselfish Gift Fulfills a Hunter’s Lifelong Dream

Ashes and Beyond: A Dying Wife’s Unselfish Gift Fulfills a Hunter’s Lifelong Dream

Does the Bug-A-Salt 2.0 Have Enough Firepower to Take Down Texas Wasps?