U.S.A. –-(Ammoland.com)- There have been startling developments in the investigation of the disastrous no-knock raid in Houston on 28 January 2019. A middle-aged couple was killed and four police wounded. In the light of contradictory police stories, the family of the couple who died hired an independent forensics firm to document the evidence at the home at 7815 Harding Street. The independent investigation took place after forensic data collection done by the local government authorities.

Rhogena Nicholas, was a supporter of President Trump. Her husband, Dennis Tuttle was a Navy veteran. They had no criminal records. They lived in their home in Houston for 20 years and were married for the same 20 years.

A narcotics investigator, Officer Goines, obtained a warrant to raid their home. According to Police Chief Acevedo and abc13.com, on 13 February 2019, the warrant was based on lies.

The police broke down their door. The first officer shot the Tuttles’ dog. He claimed the dog was “charging him”. That shot started the gun battle. Dennis Tuttle supposedly shot back with a .357 magnum revolver, wounding the first officer in the door. Initially, on 28 January 2019, no revolver was inventoried from the scene.

The day after the independent forensics team findings were released, on 14 May 2019, the Houston Police said the revolver was among the evidence police investigators recovered.

Police claim Rhogena attempted to take a shotgun from a wounded officer. She was shot and killed.  It is not clear if she ever touched the officer’s shotgun. The independent forensic report claims she was killed by bullets fired through the wall of the home, where the person firing could not have seen her. From houstohchronicle.com 24 July 2019:

Doyle said his team had recovered the bullet that killed Nicholas, and that evidence showed she was shot by an officer standing outside of the house, who fired through a wall — meaning he would not have been able to see her — striking her as she turned away from the door, toward where her dead dog was found. 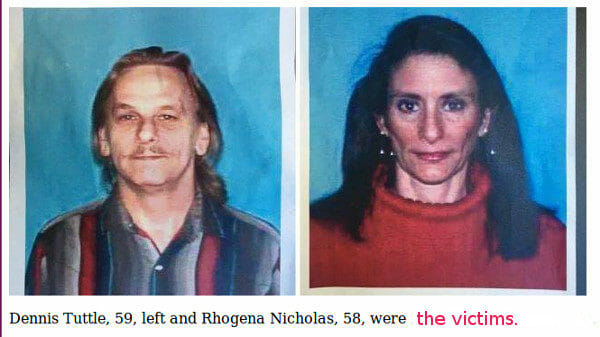 Dennis Tuttle and Rhogena Nicholas were the victims.

In addition, the independent investigators’ report claimed the couple’s dog was shot at the edge of the dining room, 15 feet from the door. That raises questions about the claim the dog was charging at the first officer in the door.

…though the outside forensics review showed the dog was shot and killed at the edge of the dining room, 15 feet from the front door.

The exact timing of events is uncertain because no officers wore body cameras. Surveillance video from the house next door was confiscated by the police. Houston Police have refused to release the 911 calls.

The independent review, released in a court filing Thursday, also highlighted the perplexing presence of two bullet holes in an inner room of the home, shot into the wall from inches away but more than four yards from the shootout by the front door.

Taken in conjunction with video footage that appears to have captured the sound of two shots half an hour after the gunbattle, family attorney Mike Doyle argued in a 22-page legal petition that the independent findings raise enough questions to merit further investigation in preparation for a lawsuit.

The independent investigators say they did not find evidence of people inside the house firing toward the outside.

The independent investigators recovered two teeth, they say belonged to Dennis Tuttle, inside the house. The autopsy of Dennis Tuttle should reveal if he was shot in the head and if he was missing teeth as a result.

Of the last 109 cases where Officer Goines swore out search warrants, all made claims of guns, but no guns were recorded as having been seized.  From khou.com:

Goines swore in search warrant affidavits that “knocking and announcing would be dangerous, futile,” because he claimed a confidential informant had seen a gun inside. Those claims led judges to grant no-knock warrants, which accounted for 96 percent of all the search warrants he filed in the last seven years, a KHOU 11 Investigation has found.

But in every one of the more than 100 drug cases based off those warrants, there’s no record of Goines ever seizing a gun after executing a no-knock search warrant.

Immediately after the raid, the meme of innocent officers being ambushed by drug dealers was spread across the nation, before it was shown to be false. From ktnv.com in Las Vegas, Nevada on January 28, 2019 (the head of the police union is Gamaldi, not Grimaldi or Grammas) :

The Houston Police Union did not hold back after the ambush-style attack.

“We need to have stiffer penalties on people committing crime, there’s no doubt about it,” said Grammas.

Grammas said he would like to see mandatory death sentences for cop killers and additional officers on the street to begin to deter the violence facing officers.

There was no ambush. The police fired first.

It was a no-knock raid based on false evidence.  There are many unanswered questions about who fired when and who hit who.

Joe Gamaldi, head of the Houston Police Officers Union, has been tight-lipped about the raid for some time. Initially, he made this threat:  From abc13.com on January 29th, 2019:

“Enough is enough. If you’re the ones out there spreading the rhetoric that police officers are the enemy, well just know we’ve all got your number now,” Gamaldi said. “We’re going to be keeping track on all of y’all, and we’re going to make sure to hold you accountable every time you stir the pot on our police officers.

Four officers have retired since the investigations of the raid began. From chron.com on March 22, 2019:

Officer Gerald Goines retired Friday afternoon while under investigation following the Jan. 28 shooting deaths of two residents during a “no-knock raid” of a Pecan Park residence in south Houston. The Harris County District Attorney’s Office is reviewing more than 1,400 criminal cases that Goines worked on over the course of his 34-year career.

Goines was relieved of duty as questions mounted about his actions leading up to the drug raid, in which a team of undercover narcotics officers burst into a residence at 7815 Harding St. after obtaining a no-knock search warrant. A gun battle ensued that left homeowners Dennis Tuttle and Rhogena Nicholas dead. Goines was shot, as were three other officers, one of whom remains hospitalized.

The four officers all had more than 20 years with the HPD as narcotics officers.

No officers wore body cameras. Shortly after the raid, Chief Acevedo spoke of officers “laying down covering fire”.  We do not know how many rounds were fired by police, or where, or aimed at who. From abc13.com on January 30th, 2019:

“After we had two officers down and another shot, the remaining officers … started laying down cover fire, left positions of cover themselves and, I believe, they heroically pulled their fellow officers out of harm’s way,” Acevedo said.

With the evidence collected by the independent forensic experts, family attorney Mike Doyle has filed a petition to allow for questioning of police officials under oath, in preparation for a lawsuit. The FBI is also investigating the case.