USA – -(AmmoLand.com)- We all enjoy the sound of crickets on a warm summer night. At least I do. I guess it reminds me of when I was a kid growing up without a care in the world, not having to go to school the next day and well, just plain old summer. Crickets remind us of silence, a sign that the daytime has yielded itself to the night. Darkness has fallen over our world; crickets now own the rest of the day into the next until the sun brightens the sky sending them into silence until the sun gives way to the night sky, once again.

However, as I’ve gotten older and the years tick by, the sound of crickets also reminds me, metaphorically speaking of the music of gun-grabber silence.

It’s a silence so deep, and it’s deafening. That deafening silence was apparent on Twitter yesterday. For the record, I usually don’t engage hateful, stupid, Twitter morons. Not because it isn’t fun to poke a liberal gun-hater beehive from time to time and watch them make fools of themselves with tweets like this:

“So you’re saying we shouldn’t have any laws at all because criminals don’t follow the laws?” or “Of course CA gun controls wouldn’t have worked, you POS, he bought the gun in Nevada legally and took it to CA, you stupid Asswipe.”

I could go on, but I would leave no more room for commentary. Suffice to say; if you go to Twitter to try to have a real conversation with someone hiding behind a screen and keyboard, you will be very disappointed. It is an awful, wretched hate-filled place that if you let it, will drive you insane, which is why I love posting and poking the liberal loons on Twitter.

My MO is to post a gun rights story, expose the liberal socialist hypocrisy, quote a gun-grabber, and move on to read the lunacy that follows. Yesterday, I responded to someone who claimed to have fled the event safely, and in her final statement, she asked followers to “please fucking support gun-control.” Of course, I took the bait and tweeted this in response:

Since my original response yesterday afternoon, there have been hundreds of rage-filled comments about me dying to calling me every expletive in the book, many since deleted. 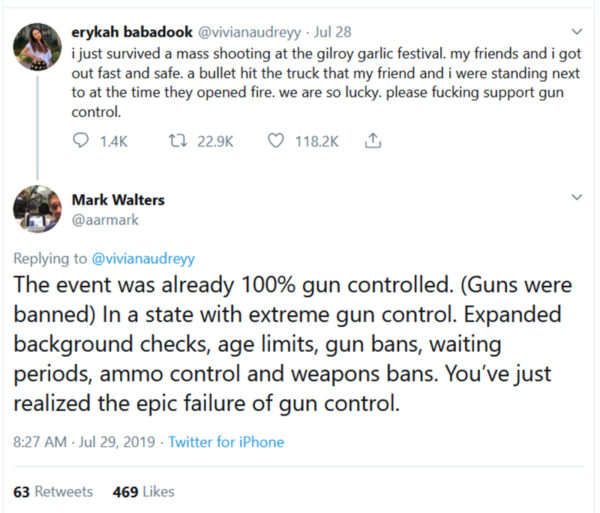 Heck, my notifications are still working in overdrive. Now, to be sure, I usually don’t engage the haters and lunatics in that forum, but I was bored last night and decided to go at it. I had more fun popping liberal heads than I could have imagined. As fun as it was, I quickly tired of the whole task of trying to keep up with the comments and decided to watch an old rerun of Two and a Half Men. It saved my sanity.

Let me help save yours. Here’s all you need to do to turn the liberal loudmouth gun-hating freak into an insect. Tell them, sincerely that you agree with them, we need one more law to stop the madness, then ask them what law they would put in place to finally end the gun violence? If you happen to be standing in front of them, cock your head like a puppy dog, open your eyes, put your hand on your chin, wipe your glasses and place them back on your face and ask again, “What ONE law would you like to see put in place that would finally stop this “epidemic of gun violence?” If you ask them on social media such as Twitter, they’ll mysteriously go away or block you. If you ask them on Facebook, they’ll probably unfriend you, and if you ask them in person, well, here’s where you’ll get the best response. You’ll hear crickets.

Oh, and if you want another way to remain sane? Unless you need Twitter, or any other social media for work-related issues, such as I do? Stay the hell off it. It’s an awful, hateful place!