I’ve been asked a lot about the new .350 Legend cartridge, the round that’s set to take on the .450 Bushmaster in the straight-wall legal midwest woods. The .350 Legend has a number of great advantages, and it’s gotten a very positive reception. But there are questions about the cartridge that need to be looked at despite the positive forecast.

To recount the full story of the .350 Legend and what exactly it does would take too long for the purposes of this article. Instead, here’s a brief summary . . .

States like Michigan, Ohio, Indiana, and others in the Midwest have laws allowing the use of straight-walled rifle cases in shotgun-only deer areas. These areas are vast and the straight-walled cases quickly overtook traditional options. The .450 Bushmaster has become the dominant cartridge in many of these areas and could easily be called the Midwest’s favorite deer round.

The .450 Bushmaster is a large, powerful round that isn’t cheap. There’s really no way to make it cost-effective in volume due to the fact that there is just so much raw material that goes into each round. 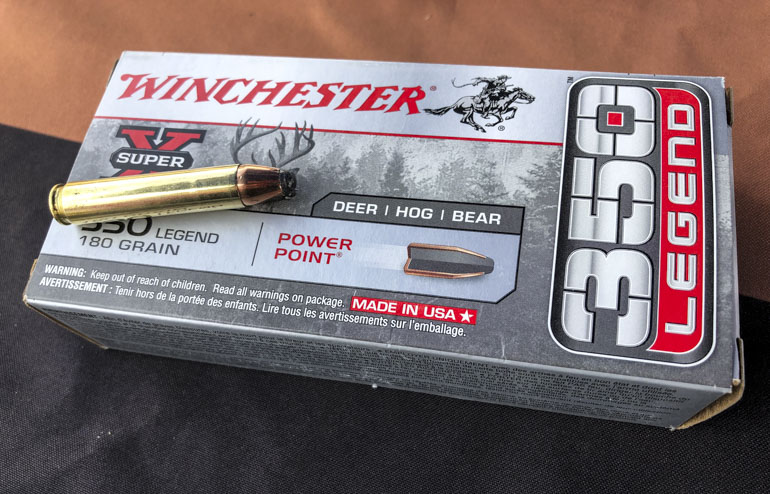 Winchester saw this and developed a new round offering a low recoil, low cost, straight-walled case that fit into the laws and guns of the area dominated by .450 BM. The result was the .350 Legend.

The benefits of .350 Legend are that it is indeed inexpensive and produces lower recoil. That means smaller or young hunters will be offered the same benefits from modern rifles as hunters shooting the more powerful .450 BM.

The effective range of .350 Legend is somewhat shorter than .450 Bushmaster, but for all intents and purposes they are both at their best at around 100 yards or closer.

The first major issue with the .350 Legend is that it has a fairly wild set of specs and some confusing potential legal ramifications. I talked to two of the leading authorities in their respective fields about the round, Hornady and Precision Rifle Company. 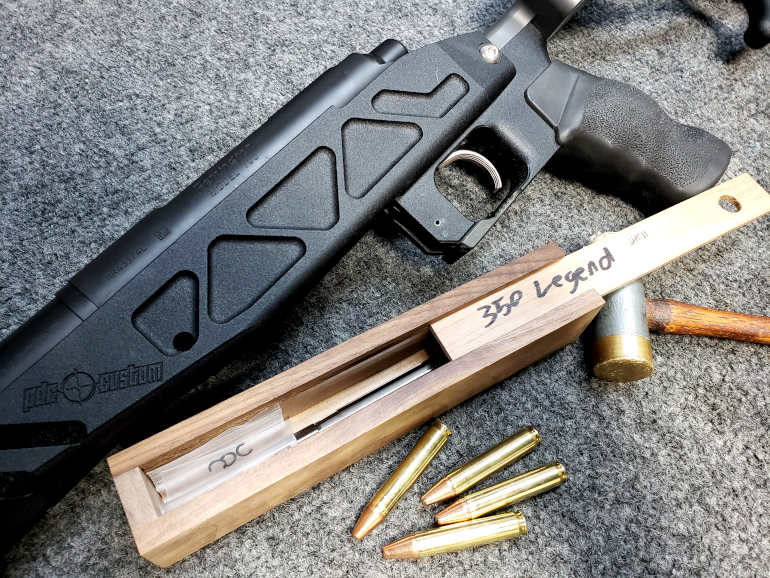 PRC was the first company to receive and use a specially made Manson reamer in .350 Legend. This precision reamer was in their hands before anyone else in the industry and they were able to begin mapping the potential of the cartridge.

As a result of this time and effort with the .350 Manson reamer, they developed a great deal of knowledge about the round before it hit the market earlier this year. Their .350 rifle shoots 1/2 MOA all day long. The masters at PRC spent an afternoon with me detailing the problems they see with the .350 Legend as it exists right now.

Not even Hornady knows the answer to that. I spoke to Hornady’s Neal Emery and this is what he had to say:

I’m sure they have their reasons, but it’s baffling as to why they didn’t spec the Legend with .357 or .358 caliber bullets with so many more options that would work better at those velocities.

Hornady decided to go with a .355 bullet for their new American Whitetail 170gr Interlock. Winchester lists .357 as their diameter. So what’s right here? SAAMI says that the Legend can have bullets ranging from .354 to .357. But PRC tells me .357 bullets won’t chamber in the match-accurate X-Caliber .355 barrels. It therefore has a maximum bullet diameter of .356 and not the more common .357. Bullets for the .358 Winchester won’t work, which is disappointing considering that there is a well-established market for these bullets.

We reached out to Winchester to ask about these potential problems. A Winchester representative had this to say about the .350 Legend:

Additionally, some reloaders have asked if they can reload 350 Legend using various component bullets that are already on the market. Reloaders could probably find existing bullets that will work, but they will not be ideal for the 350 Legend cartridge. Many of the existing bullets on the market were designed for terminal expansion at lower velocities, and therefore will not perform properly on game animals at the higher velocities of 350 Legend. Additionally, many existing bullets lack the correct ogive to be seated at a length that will chamber reliably in the 350 Legend. A similar example exists with 30 caliber rifle bullets; there is not a single 30 Caliber bullet that can be loaded perfectly across all 30 caliber cartridges. We don’t use the same bullets for 30-30 Win and .308 Win and 7.62x39mm. When Winchester designed 350 Legend, we engineered all of the bullets from scratch to be optimized for the new cartridge. We are also beginning to deliver those bullets as components.

There are a few problems with this answer. The first being that the .350 Legend is a rifle cartridge and the issue of diameter and chamber pressure. The .350 Legend is not a pistol cartridge, despite being quite similar to one in a number of ways.

As far as the ‘exiting bullets’, that must refer to .357 handgun bullets, which would in fact be designed for velocities slower than the .350 Legend can generate. .358 bullets would certainly be suitable for these velocities, as they are made for full-power rifle rounds.

In my opinion, the .350 Legend is robbed by limiting reloaders with proprietary bullets. The .450 Bushmaster can use any .452 bullet out there, rounded, flat point, cast lead, or tipped with no issues.

I’ve written a number of articles on that cartridge and know just how it works with anything from swaged down .458″ .45-70 bullets in the 400 grain range to cheap plated lead subsonics for range fun. The .355″ rifle bullet is a relatively rare thing and I don’t know that it will ever gain enough popularity to become one in any serious way.

The .358 option would have been a huge benefit for everyone and I can’t think of a reason it wasn’t made to work except to corner a new market.

Bullets I pulled from Winchester FMJ white box ammo varied greatly in diameter. I had bullets ranging from .349 to .353, but nothing as high as .355. This is troubling for a variety of reasons and not just as far as accuracy is concerned. There is a basis for potential legal concern. Ohio lists a minimum caliber of .357 for their straight walled cases, but the .350 Legend is not necessarily a .357. A case could be made that the .350 is not legal as a result.

Would Hornady loads be illegal at .355 and Winchester legal at .357? I’m no legal expert, but I know that there is enough difference between the .38 SPL and .357 Mag in Michigan to make one legal and the other not. The .38 SPL case is only .005 short for deer. In a game where a we measure to the third decimal, I worry that the .350 Legend should have gone to .358 to ensure it is never called into question. There are not many options out there yet for the .350 Legend as I write this. There’s a Ruger American Rifle sitting in my safe right now and it’s one of the first factory options made for the caliber. There are a few other rifles available, but many are wanting in quality unless you go the custom route and talk to PRC. Leupold has jumped on the train and makes a scope specific to the .350 Legend. This is great glass and it has a BDC rated for the cartridge. Look forward to a review of this scope and a full review of the Ruger American Rifle in .350 Legend as we get closer to summer ending and the start of hunting season.

As I type this article, there are five companies I know of that are either working on or in the process of introducing rifles chambered in the .350. There are also several that are making or preparing to make ammo for it. These are both large and small companies, so there will be plentiful variety. 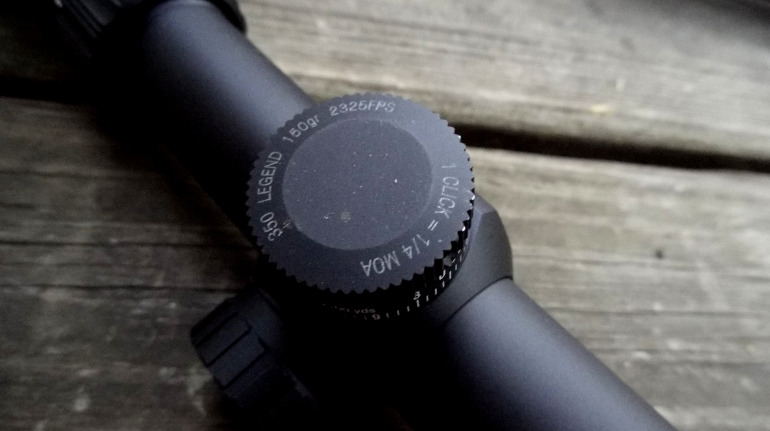 I have heard of a number of reliability issues already coming to surface with the .350, especially in an AR rifle. The case geometry requires a new magazine, despite the fact that it uses a regular .223 bolt. PMAGs won’t work and I have tested them to prove it.

I see no reason why a person would be at a disadvantage with a .350 Legend rifle in .450 Bushmaster territory. Cost and recoil are two significant factors, and since the two rounds have the same general effective range, a new hunter or someone smaller in stature would do well to take a serious look at it.

Just as with the .450, there will be some bugs to work out before the round becomes totally viable. I haven’t seen a great amount of press covering it yet and, aside from my own articles, there doesn’t seem to be a great amount of enthusiasm for the idea so far.

I think that the greatest fault of this cartridge was the choice to go with a .355-357 bullet instead of a .358, but that’s just me. Time will tell if this minor thing becomes an actual Achilles’ Heel.