I have been involved in the shooting sports since I was about 14 years old. In that time I have participated in some great competitions and met some truly wonderful people as a result.

While I’ve been impressed with what I have seen in many areas of competition, I was truly pleased with what I found when I traveled out to cover a recent Guardian Long Range Competition event at the Marksmanship Training Center in Lake City, Michigan.

While most UKD ranges only go to 800 yards, the MTC facility boasts one of the longest, most difficult professional ranges in the country.

Unlike many other long range facilities, MTC has steel plates suitable for big-bore rifles including .338 Lapua, .408 Cheytac, and .50 BMG. All said, the MTC facility is without peer in the state of Michigan and probably much of the Midwest. A shooter fires from a barrier in this event.

In addition to events like the Guardian Long Range Competition, MTC also hosts challenges like the Wolverine 5K, a tactical adventure race with a Red Dawn theme and encompasses skills such as orienteering, marksmanship, physical endurance, and task handling/teamwork. There are also other matches, both handgun and long range, that take place at MTC every month.

The Guardian Long Range Competition sounds just like any other match until you look beyond the title. The Guardian matches do exactly what the name implies: they raise money to find orphans and foster children new families…guardians if you will.

Guardian Long Range matches are currently held in several of the most beautiful states in the country as well as in Ireland. Shooters have raised almost a million dollars for children through the Guardian Long Range program and have placed over 300 of them with new families.

The money raised in Guardian matches goes straight to foster and adoption programs. MTC donates the range for Guardian’s use, which means that the thousands of dollars it would otherwise cost to rent it out are instead spent on the care of children.

I can attest to the fact that the management of MTC is top-notch and deeply cares about the success of the Guardian program. Just a small number of the rifles used at the Guardian event.

As far as the attitude of the match, it is not like some other Precision Rifle Series events. The Guardian match was relaxed, without any divas or sore losers. I lost interest in PRS in the early days of the sport when it became so competitive that it was unenjoyable. There were a lot of metaphorical golf clubs thrown, so to speak.

The atmosphere at a Guardian match is extremely friendly and laid back with the focus bon camaraderie and fellowship and not winning at all costs. There were several tables loaded with pizza and everyone was having a very good time.

The average attendance is over 120 people, but the match I attended was between 80 or 90. The wild Michigan weather proved to be an added challenge. It rained so hard it was like you were standing under a cold shower and there was lightening and black clouds in the distance. Yours truly had a two-hour ride home in soaking wet clothes as a result.

The fact that there was an excellent turnout despite the weather shows the dedication of these shooters and the fact that they believe in the cause they are shooting for. The firing line was busy and bristling with rifles.

Guardian events are low-pressure and there were seasoned shooters right alongside those who were attending their first match ever. Families were also well represented, some with several generations present. The oldest shooters were around 80 and the youngest a boy of eleven. Patrick of Michigan and his two kids, Xander, 11, and Christelle, 14, have shot in six Guardian competitions with Xander usually being the youngest shooter in the crowd. They each have their own rifles, respectively a 6.5 Creedmoor, a 6mm Creedmoor, and a .224 Valkyrie.

Xander’s 6mm has probably the very first McMillian A10 stock produced on his rifle. Patrick’s and his family have seen an increase in family participation in the Guardian events. Patrick enjoys that his kids can grow up with fun people, camaraderie, and a good support network that itself is based around family. Geoff Glover enjoyed his first match ever at the Guardian competition.

Geoff Glover, 61, of Toledo, Ohio shot his very first competitive match at the Guardian, but has been shooting long range for some time. He shot a rifle that started out as a factory gun, but was rebuilt in 6.5 Creedmoor.

“I promised myself that if I shoot in a match, my first would be Guardian because I like what they do,” he told me.

Geoff heard about the Guardian matches from a video he saw three years back and believed it to be a good cause. He described his first match as low-stress and fun, even with the misses.

One particular challenge appeared easy, but was actually extremely difficult. The Vortex Challenge involves shooting a 3-inch steel plate at 300 yards in 30 seconds with one shot. The catch is that you have to start about 30 feet back and run up to your rifle which is waiting on the line for you.

One of the match directors told me that only about 10% of shooters are able to complete the challenge. Upon hitting the target, the whole line cheers and the shooter is awarded a challenge coin. As far as gear goes, I saw just about everything, with all manner of rifles and optics.

According to Gary Larson, the founder and organizer of the Guardian program, about 70% of shooters are firing 6.5 Creedmoor rifles. Most of the rifles are factory built or start off as factory guns that are later customized. No two rifles were exactly the same, but there was certainly a general theme among them as far as set-up and support gear.

Factory-based rifles common on the line were typically Remington 700 type guns in a metal chassis or an adjustable traditional stock. There were a few Accuracy International rifles there, but I didn’t see any comparable American designs like the MRAD.

Rifles from my friends at Precision Rifle Company were well-represented on the line, which makes sense as they are the best rifle builder in the entire Midwest IMHO. 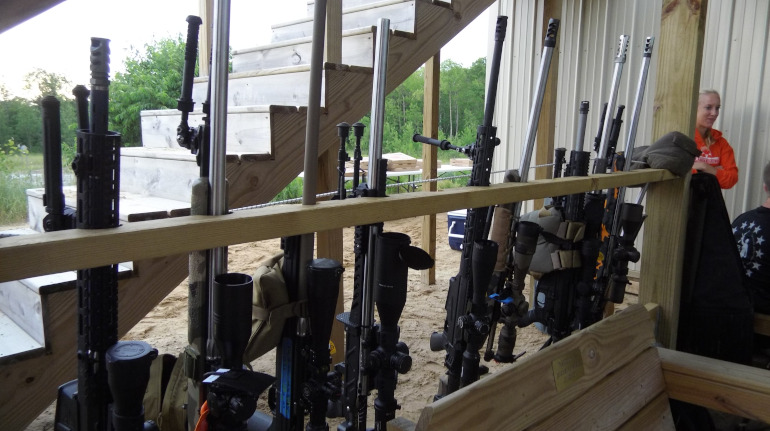 Overall I was very impressed with what was taking place at the Guardian Long Range Competition. Larson, the founder, was at one time a foster kid himself and cares very much about the success of the children supported by his organization.

The match fee is tax deductible as a donation, which is a plus. This organization is doing great work and helping to not only find new homes for children, but to offset the cost of adoption and foster care for families.

I would strongly recommend participating in the Guardian program. If you’re a manufacturer or range manager, I’d suggest considering a sponsorship or donations to help these wonderful people spread their message of family and friendship. While you’re having fun at the range with your friends, your money is going to help those who can really use it.