USA – -(AmmoLand.com)- Virginia Governor Ralph Northam took a second bite at the apple, in an effort to implement sweeping gun-control laws on the very people he represents. Here’s his list of policies and the comments he used to justify them.

We all know the Anti-2nd Amendment Radicals love the term “assault weapon” because it scares people who don’t know any better. They are the very people the gun-grabbers are speaking to. “Assault weapon” and “gun-violence” are the two most powerful terms fueling the anti-gun fear-campaign.

The idea is to qualify bumpstocks as “machine guns” and give authority to the ATF for determining important terminology related to the national ban on bumpstocks. This is hype at the State level to gain traction on the national level.

Why? Because it’s trendy again among the gun-grabbers. Accessory bans are part of the overall attempt to make future gun-ownership impossible. Oh yeah, they call them “silencers” so the anti-gun people will think killers will be roaming their neighborhoods killing people and no one will be able to hear it happening.

According to Northam, ten rounds is ok, but 11? Way too much. Another attempt to squeeze “accessories,” under the guise of “gun-safety.”

Red Flag Laws are a way for Judges to sign off on household gun-confiscations without due-process and hand the authority over to police departments, based on nothing more than an accusation that the gun-owner may be a risk.

Of course, the Gun-Grabber’s claim is that Universal Background Checks will save lives. The truth is:

Limit handgun purchases to (1) per month. 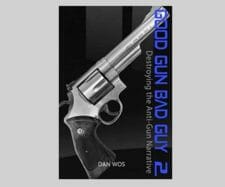 Because, somehow, if you buy two, you are more likely to kill people. This policy is similar to Eric Swalwell’s “48 hour cooling off period for firearms purchases. The idea that limiting handgun purchases to (1) handgun per month would prevent bad behavior is an idea that lives in the minds of Anti-Gunners. By believing others would act dangerously with two handguns, the Gun-Grabbers may be revealing more about themselves than they realize.

This is a common projection that comes from the irrational gun-fear crowd that believes “guns make people do bad things.” This reveals their own dangerously volatile lack of physical restraint. Someone who thinks “anyone buying more than one handgun a month, makes them dangerous,” may have some deeper issues that need to be addressed.

Tougher penalties for having a loaded gun around a child.

This policy would lead to guns being locked up in safes or rendered useless, putting people in danger while in their own homes. The idea behind this policy is to protect the bad guys while using the “Toddler and the Gun” scenario to tug at the heartstrings of the angry anti-gun crowd. The Anti-2nd Amendment Radicals want everyone to believe that all across America, cute little diaper-bottomed babies are killing themselves with guns that their parents irresponsibly left loaded and laying around the house. This never happens, but it helps anger the anti-gun crowd. Remember, they care about babies so much, they will kill them after birth to stay in good graces with their political party while claiming to want to protect them.

Here are some of Governor Northam’s comments and my responses.

“None of these ideas are radical.”

WRONG. They are ALL radical because they violate the rights of Americans and put them in danger in an attempt to push a political agenda.

“None of them violate the 2nd Amendment.”

WRONG. They ALL violate the 2nd Amendment, and some of them violate the 4th, 5th, and others.

“None of them would impair any of my fellow Virginia hunters or sportsman.”

WRONG, unless the “public” surveyed were skinny jean wearing, latte drinking, friends of David Hogg. This is a strategy that works great on leftists because they are more likely to fall in line with “group-think.” They will do anything to be part of the “popular table” or the “90%” and avoid being an outcast. This type of strategy doesn’t work with Conservatives, but leftists haven’t figured that out yet. The hope is that by saying a policy has “90% support” everyone else will doubt their own position and get on-board with the majority. Gun-owners make up almost half of the American population, and this statement is designed to make you believe that they want to be added to database.

Governor Northam’s 2nd attempt at implementing these policies failed on July 9th, 2019, but will most likely come up for a vote again in November.

Dan Wos is an American entrepreneur, author, musician, and NRA member. He is the founder and President of House Detective Inc., a home inspection and appraisal company serving many markets across the United States. He is also an active real estate investor.

Carrying One In The Chamber, Continued