I recently spent a great deal of time getting to know SIG SAUER’s brand new P365 Manual Safety. I fired a lot of rounds through it, to the tune of 2,000, and it impressed me enough that it has become my new carry gun. Today we are going to take a look at another new P365 model, the just-released P365XL…and a first look at the SIG ROMEO Zero red dot.

The P365 series has surprised me. When I saw the first press release photos of the original model, I wasn’t immediately taken with it…that is until I noticed the magazine capacity and weight.

After my initial tests with the first model last year, I was impressed with what SIG had delivered. Apparently gun owners have been, too as the P365 is now one of the most popular EDC concealed carry guns on the market.

Fast forward to a few weeks ago and, with the addition of a model with a manual safety, I can’t imagine carrying a gun that isn’t a P365 of some kind.

The SIG P365XL is the latest version in the popular line, featuring a longer grip and a lengthier slide. This should be a popular option for shooters with larger hands or those looking for more standard capacity.

In short, with two rounds more of standard capacity in its standard 12 round magazine, more sight radius and an optics-ready slide, the P365XL combines virtually every feature most carriers could want in a carry gun. While slightly larger than the original P365, the subcompact P365XL is still relatively small. It is about a half-inch longer in the barrel than the standard P365 and only slightly longer in the grip. It still features good concealability and doesn’t feel much different in the holster or on the hip than the standard P365. It does stick out slightly more due to the grip, but that isn’t really noticeable for most concealed carriers. Since most of you will be looking for direct comparisons, this gun is thinner and lighter than a GLOCK 26, despite carrying two additional rounds standard. It has a much more ergonomic grip — especially for those with small to medium hands — than any other small pistols out there and is not in any way boxy or hard to hold onto.

The P365XL is actually much closer in size to a GLOCK 43 than it is to its own sibling, but carries twice the number of rounds as its Austrian competitor. This alone is a massive advantage. There are few concealed carry pistols that come close when capacity and ergonomics are concerned. The P365 has three major differences that distinguish it from the original micro-compact P365 models. First is the longer XSeries grip module. It has a slightly longer beavertail and accommodates a 12-round flush fit magazine (note: the 12-round extended magazines for the original P365 models won’t fit the XSeries P365XL as the baseplates are different).

The magazine well on the XSeries grip is beveled and, while on the thin side, it still has enough of a funnel to make reloads fast.

The modular grip is compatible with other P365 models, but is not yet available on its own in SIG’s online store. You’ll be able to swap out your existing module with this version eventually. It should be noted that the flat trigger will be available from SIG as well so you can upgrade your existing P365 if you wish. Note that slides and grips can be swapped between the two P365 versions. That’s the longer P365XL slide on the smaller P365 frame above. Below is the standard P365 slide on the XSeries P365XL frame. (Josh Wayner for TTAG)

The second change is the slide length. The barrel of the P365XL is .6 inch longer than the standard P365. Combined with a longer slide (overall length is 6.6 inches), the sight radius is .7 inch longer on the P365XL. That makes for more accuracy at longer ranges.

Note that the longer P365XL slide can be mounted on P365 frames, which is a nice thing for the people who want a bit of extra barrel length without added frame length.

The last difference here is an optics-ready slide. The rear sight and mounting plate can be removed by means of two screws hidden in the slide. You need to remove the slide to locate those screws. Don’t attempt to alter the sights with the slide still attached to the gun.

In addition, the P365XL has a new flat-faced trigger. It has a distinct first stage pull. The break is a tad mushy, but it’s far crisper than most other polymer-framed guns. It’s very close in feel to the full-size P320 and M17. I really like the feel of the flat trigger shoe and will be switching my P365 Manual Safety variant over to it as soon as the parts are available.

This is where I’ve got some exciting news for you, dear reader. I am among the very first to get my hands on a prototype unit of the brand new ROMEO Zero red dot sight. The unit I have here is functionally the same, but will vary slightly from the production unit, which should begin shipping in the near future. I’m told that there will be some differences in the lens, but this is as much as I know at this point. The ROMEO Zero is a mini red dot sight that has a durable polymer housing and is meant for use on thin pistols like the P365 series and even the 1911. The sight installs with two screws that come down from the top, not the bottom.

It should be noted that the sight is constantly on and is powered by a battery under the body of the optic, so changing the battery requires removing the sight.

I’m looking forward to seeing where SIG goes in this mini-red dot market. This is only a first look and a full review of the production version of the ROMEO Zero will follow. Shooting the P365XL and Romeo Zero was a very enjoyable experience. In fact it was so enjoyable I spent a large part of a sweltering, painfully humid day putting 1,500 rounds through it. My hands were so sweaty during testing that I had a hard time loading rounds into the magazines, but this is why gun reviewers are paid the really big bucks. I have a bad habit of ignoring specified break-in procedures, even on very high-end guns and barrels. I think that if it doesn’t work right out of the box, it’s not worth the cardboard it was shipped in.

I picked up the P365XL and went straight to the range with it, where I got the gun blazing hot and put a decent dent in my stock of 9mm ammo. I had not a single failure to feed or fire in the course of those 1,500 rounds. It should be noted that I have fired just shy of 4,000 rounds in P365 pistols in the last couple weeks with zero failures. This is a solid, accurate, and dependable design.

I tested the velocity and accuracy of the P365XL over my Oehler 35P chronograph.

Group sizes listed are the result of three five-shot groups at 25 yards. Note that I said 25 yards. I fired all groups with the ROMEO Zero attached.

Overall I was extremely impressed with the P365XL’s accuracy. The gun is easy to shoot (especially with the mounted red dot) and recoil is very manageable. Chalk some of that up to the larger grip of the P365XL.

I loved how fast it was in the hand and how quick follow-up shots were. Like the original, smaller P365 and P365 Manual Safety models, accuracy (see results above) was excellent for such a small gun.

Velocity numbers were slightly higher than my test with the P365 Manual Safety, something you’d expect with a slightly longer barrel. I didn’t get to test the same number of different ammo types in the XL, but I was able to dive deeper with both the SIG 365 FMJ and Black Hills FMJ. These FMJ loads are what I would describe as high-quality bulk/practice. These aren’t typical cheap range rounds, but are instead affordable match-accurate loads. 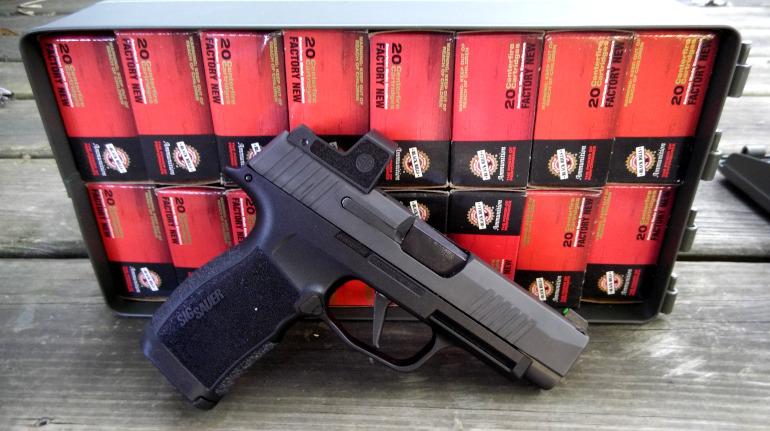 The 365 FMJ is a great, low-recoil offering made by SIG for the P365 pistols. It’s great in full-size guns like the M17 as well and is my favorite club match load due to how soft it shoots. The Black Hills 115gr FMJ is more powerful and is comparable to NATO loads as far as how it handles in most handguns. I have used it for a while now and know that it is probably the best training option available for military ammo.

Just as in my previous P365 MS review, the Black Hills HoneyBadger 100gr +P was the most accurate. I was able to extend my engagement ranges out to 50 yards with the ROMEO Zero on steel plates. It just wouldn’t miss and I wished I had brought more than two boxes to the range. The stuff just shoots so well that I consider it the baseline standard for accuracy in 9mm. I have to say that I am very happy with what SIG SAUER has accomplished with the slightly larger P365XL. They delivered everything you could want in a carry gun. I love how it feels in the hand and on the hip. I am sure that you will as well when you pick one up.

Accuracy * * * * *
The P365XL’s additional sight radius makes for easier shots at distance. The ROMEO Zero is a great, reliable red dot and, while only a prototype, it has great potential for increased accuracy. I was able to deliver rapid, easy hits on steel at ranges out to 50 yards.

Reliability * * * * *
Perfect. I went to my local FFL, got the P365XL, installed the ROMEO Zero while talking at the shop, and then went right to the range and fired 1,500 rounds without a single failure to speak of.

Ergonomics * * * * *
The XSeries P365XL is small enough for CCW use, but feels like a larger gun in the hand. It handles like a full-size pistol while concealing just about as well as the smaller P365 pistols.

Customize This * * * * *
The ability to use any modular P365 parts enables you to swap out slides, grip modules, and magazines to make a gun that truly fits you as an individual.

Aesthetics * * * *
For such a small gun, the P365XL has excellent lines and nicely blends function with looks.

Overall * * * * *
I am extremely pleased with the new SIG SAUER P365XL. I have been impressed time and again with what SIG is turning out these days and the P365XL is a testament to the combination of engineering, flair, and function that SIG can deliver. The P365XL gives buyers still more great options in a line of very versatile concealed carry guns.

New York Desperately Tries to Squirm Out of SCOTUS Case