Unless you’ve been living under a rock, you’ll know that SIG SAUER has upped the ante in the concealed carry and self-defense world with their P365. For the cave dwellers among you, the P365 — SIG calls it “America’s most popular handgun” — is a sub-compact 9mm pistol that boasts excellent accuracy and a staggering 10+1 standard capacity in a very compact form factor.

Recently they raised the bar by making their already innovative pistol safer in the eyes of many people, this writer included.

The P365 variant here, announced at this year’s SHOT Show, features a manual thumb safety. That may not seem like that much of a big deal until you realize that a manual safety is a make or break option for many, many shooters. I conducted an informal survey among several dozen people I encountered in the course of my daily travels and about two-thirds of the crowd wanted an external safety.

Tactical polo bros rarely value a manual safety and sometimes consider it to be a dangerous feature or an outright liability. This high-speed mentality often ignores the fact that the majority of people who carry aren’t gun people and want simple, safe features that they are comfortable with.

I won’t get into the nuances of this mentality as I could never consume enough Monster Energy flavored vape cartridges to put myself into the mindset necessary to relay it to you.

Suffice to say, even routine actions like loading and holstering can lead to an accidental discharge or an unsafe situation when no manual safety is present. The fact that the gun is basically ready to fire the moment you put your hand on the grip is not something that delights many people, especially those who carry off-body in a purse, backpack, or diaper bag.

The addition of a manual safety model to the P365 line is the thing that fully convinced me to make this a daily use carry gun. I previously reviewed the original P365 and liked it, but I never really felt great about carrying it. The triggers on the P365 pistols I have tested are light and crisp, just like a full-size pistol.

The small grip and crisp trigger made it so that I was somewhat uncomfortable with carrying it for fear of an accidental discharge. The addition of a manual safety makes me completely comfortable with it now in both a pocket holster or IWB. I have carried a Smith & Wesson .38 J-Frame for years and it has no manual safety. It also has a super-heavy double action trigger that really can’t be pulled by accident.

The SIG P365 has a trigger pull that’s significantly lighter at about 7 lbs, which puts it in the same range as most regular 1911s and some AR rifles. That’s relatively light, which, in my book, makes it absolutely necessary to exercise caution when carrying with a round chambered. There is no trigger safety, so it is imperative that you are unerringly careful.

While it may not seem like a huge upgrade, the manual thumb safety makes the P365 one of the safest everyday carry guns on the market today. The safety itself is ambidextrous and clicks positively into position. A great feature of this model is that it can be loaded and unloaded with the safety on. The same can’t be said for many other guns which only allow loading with the thumb safety off. 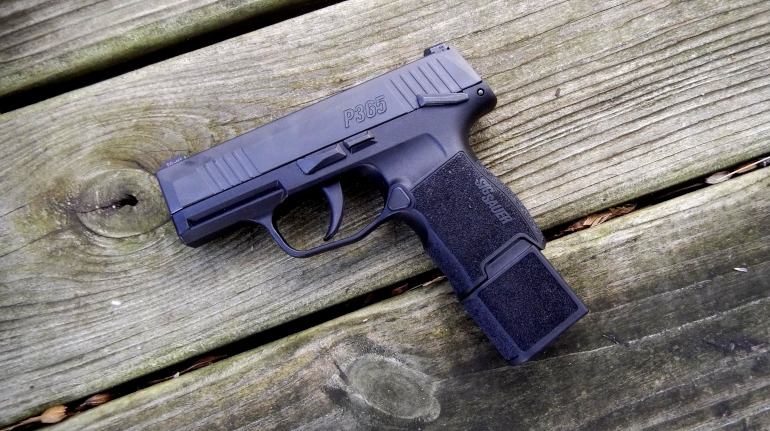 15 round magazines do add a bit of length, however they are great for a backup mag. (Josh Wayner for TTAG)

Aside from the safety, the features of the gun are the same as the standard P365 (see our review here). Night sights are standard. They’re easy to use and are very easy to pick up in low light or total darkness. Magazines drop free with no hangups. Included with the gun are two, 10-round mags, one with a short finger extension and the other a flush fit version. Twelve and 15-round extended mags are available, too.

I tested this new SIG P365 version with the safety with a mountain of ammunition to fully ensure that it’s able to pass my own standards for a carry gun and to dispel lingering rumors of problems with the design.

The P365 I received saw over 2,000 rounds right out of the box and was never cleaned or even wiped down. I fired just about every brand of ammo and recorded my results below.

As far as general performance was concerned, the P365 shot anything and everything I put through it. I had absolutely no failures to feed, to fire, or to eject with any ammo tested. The pistol was very accurate, especially for a compact carry gun, with virtually everything I fired through it. Of particular note was the accuracy I got from the Black Hills 100gr HoneyBadger. I have tested this load in numerous guns across many months and even did a standalone review here on TTAG. I keep coming back to this load in my article notes as it is just so damn accurate and reliable. I love all the ammo I test, but for whatever reason this load from Black Hills is always the most accurate at every range.

Close in at 15 yards it was matched by Lehigh Defense’s HERO load, but out to 25 yards it quickly outpaces all the others and behaves like a little rifle round. I was easily able to make hit after hit at 50 yards on a 10” plate using the Black Hills load. That said, I am always impressed by the ammo innovations from the other companies featured in this article. For general carry, SIG’s 365 load is hard to beat. You can read the review of that here. 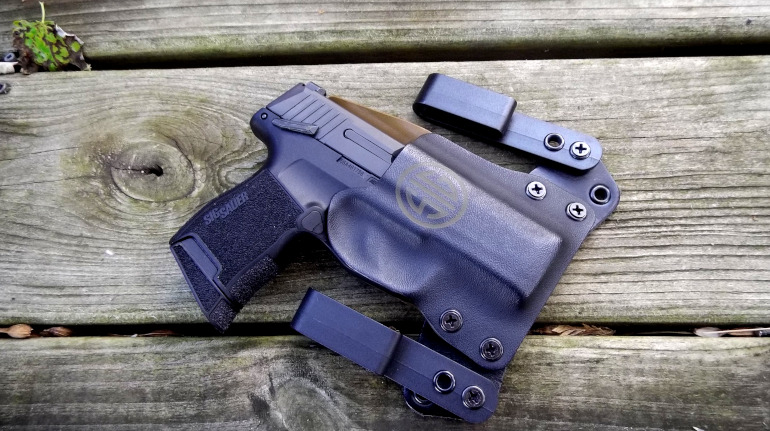 The P365 Manual Safety is one of the most compact, reliable, and accurate handguns you can own today. I will be using this pistol across the summer for most of ammo testing. I think that it will serve me and you well as you read the results I get. I don’t recommend this gun lightly, either.

Accuracy * * * * *
This is probably the most accurate compact semi-automatic everyday carry gun I’ve ever used. It shot like a full-size pistol and refused to miss even small targets.

Reliability * * * * *
I put a stupid number of rounds through the P365-MS in only a couple of range trips to ensure it goes bang every time. In 2,000+ rounds it never failed to feed or fire.

Ergonomics * * * * *
This is a well-engineered pistol that feels great in the hand and carries easily on the hip. The manual safety lever feels very positive and is easy to disengage.

Customize This * * * * *
It already comes with XRAY3 night sights. The ability to change out grip modules, change colors, add lasers, swap sights, and go from 10+1 to as many as 15+1 makes this one of the most user-friendly carry guns out there.

Aesthetics * * * *
The gun is small and efficient. I love the smooth lines and high capacity (for a sub-compact). Many small carry guns are plain, if not downright ugly, but SIG managed to make the P365 fairly pretty and functional.

Overall * * * * *
Just like the article says, this may be the best carry gun on the market right now. There is really nothing out there that even comes close when you blend size, capacity and features. The addition of the safety option makes it darn close to perfect.

Most Common Prejudices About Gun Owners & Firearms Use

Bernie Sanders has a Recently Bad Record on Gun Rights

Bernie Sanders has a Recently Bad Record on Gun Rights