U.S.A. –-(Ammoland.com)-The era of printing 3D firearms is here! The CAD designer known only as Ivan The Troll is one of the leading figures in the field. He is the DeFacto spokesman for Deterrence Dispensed which is an online group of designers that make and share 3D printable firearm CAD files.

New Jersey Senator Bob Menendez put tremendous pressure on Twitter to ban Ivan who shared his creations through the social media site. Twitter caved and banned Ivan’s account although they claim it wasn’t due to the Senator’s pressure. A Twitter spokesperson told AmmoLand that they banned his account for violating Twitter rules.

That banning hasn’t stopped Ivan from sharing his works on sites such as Bitchute and Gunstreamer. Ivan has created some fantastic designs, including a Glock 17 frame. He produces videos along with the files to allow others to replicate his work.

Ivan is more than just a Second Amendment advocate. He is also a true believer in free speech and insists the First Amendment protects his right to create and share CAD files.

I had a chance to speak with Ivan about his work. Ivan’s real identity is not known in the general public, and AmmoLand will respect his anonymity.

John: Deterrence Dispensed is a decentralized group, but you have become the DeFacto spokesman for the group. Do you worry that makes you a target for overzealous government officials?

Ivan: I’m sure I’m a target just from the standpoint of hostile AGs trying to find a way to stop me by using legal threats, but deep down I suspect they don’t have the resources to uncover and come after an anonymous individual, especially when that individual is obeying all laws that they are subject to.

So – I’m sure I’m a target, but I’m not worried about that, simply because I’m sure the AGs realize unmasking and coming after me is far more trouble than it’s worth to them – I’m one of many doing this, trying to take me out will only spawn more people like me.

Ivan: I’m not sure if you’ve seen the article The Trace put out, but they got word from Menendez and from Twitter; evidently Menendez was told Ivanthetroll12 was banned for being an alt account (which is utter BS, as it’s my first Twitter account ever).

This is sort of proven when you see that Twitter told The Trace I was banned for engaging in illegal activities – the only activity I engaged in was sharing gun files, which is only illegal in such awful places like China, North Korea, and New Jersey – places that restrict free speech when they object to the subject matter.

So, as a result, you find that Menendez forced this ban, Twitter couldn’t decide on their posture, but has since banned other people who shared links to gun files for the same “illegal activity” – so it seems Twitter caved to the will of Menendez (and concern groups like Brady and Giffords), and now treats NJ law as the arbitrator of what is and isn’t legal speech on the internet. Pretty disturbing stuff.

John: Some people would say, “Why poke the bear.” But that is what you do by releasing 3D printable gun CAD files. Why is it important to get these files out in the public domain?

Ivan: I think the easy answer here is just to make analogies to other activism. Why would women hold marches for suffrage? Why would MLK march for civil rights? Why would people protest wars that don’t concern the US? This country is based on this radical idea of freedom – that you’re free to exercise certain rights, and that nobody should be able to stop you from doing so. So, some may say “poking the bear,” I say exercising my rights. It’s all a matter of perspective, perhaps.

Now – why do I think it’s important to get files into the public domain? Two reasons. First, information unshared is information lost. I’m sharing the original technical plans for the STG44 – the complete plans, in German. It has huge historical value, and if things like the other technical data packages I share were kept hidden away, mankind risks losing that info. Second, data should be shared because it makes the second amendment immaterial. You don’t need a gun to have access to a gun, so to speak. Your human right to defend yourself cannot be taken away; each project and file shared is another nail in the coffin of this idea of a planned society.

John: Cody Wilson, the founder of Defense Distributed, once told me he was a “crypto-anarchist.” Would you consider yourself one as well? If not, what are your politics?

Ivan: I’m not really sure where I align politically. I’m a bit of a snowflake in that regard. I vibe with most all of the crypto-anarchist stuff; I really hate government (in my mind it should only exist to protect and promote the lives of citizens, something no government has ever actually managed to do for more than a few years). I like individualism, I think people are good at choosing what they want, and the only laws should govern interactions between individuals that result in harm to one or multiple individuals.

Ivan: Free speech is a huge issue for me. Any time the government prohibits individuals from engaging in non-harmful action, I have a problem with it. That can be New Jersey telling me I can’t publish and share public information; it can be the fed telling me I can’t make MGs in my basement.

I object to that because it’s bullshit, my actions are non-harmful, and this country recognizes both those actions as protected under the 1st and 2nd.

John: Do you know if anyone has tried to track down your real identity?

Ivan: I know that there are parties who want to know who I am. If I were a public figure, I’m sure I’d have gotten cease and desist letters by now.

John: What precautions do you take to safeguard your identity?

Ivan: I use VPNs, a burner phone, encryption in sensitive conversations, never post pictures of the sky, or other identifying info. I’m sure I could be safer with my identity, but you’ve got to be part ways open in order to stay engaged.

John: You printed created and printed a Glock 17 frame. Did you test fire it and did it hold up?

Ivan: Yeah, FreeMenDontAsk, and I worked together to bring the printed G17 frame to life. It was his genius idea to use DIY metal rails to hold the slide on, and I helped validate the design and test it. Since the release, a couple of sources have sold the rails, and we have a lead on a Chinese supplier such that we could sell the rails for dirt cheap prices. I’ve fired it lots and lots, many videos of it on my Gunstreamer account: https://gunstreamer.com/@IvanTheTroll

I’m well past 500 rounds with no measurable wear on the aluminum rails, and it runs flawlessly. Plus, being able to print the frame gives you full control of customization so long as you know CAD. Print a logo on the grip, a slogan, change the texturing, add an undercut, move the finger grooves around – it’s a sandbox to play with. 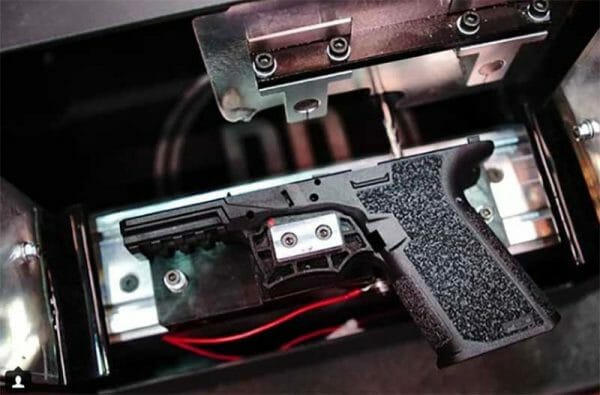 John: How did you learn CAD?

Ivan: I first used CAD in a high school class, and I instantly picked it up. I compare it to those kids that can pick up new musical instruments, and they just know how to play them – I was like that with CAD. I honed my skills, found it to be fun, and would take parts from around the classroom and reverse engineer them for the heck of it. My talent and passion only grew from there.

John: Any parting word of wisdom for the AmmoLand readers?

Ivan: You only have the rights you’re willing to fight for. Exercise your rights. Learn CAD (it’s quite simple, and Fusion 360 is free). Get a printer if you’ve been thinking about it, Creality Ender 3’s go for 200 bucks, and you can print AR lowers, Glock frames, and more with them. It’s a fun movement to be a part of, and at the end of the day, it helps secure what I believe is a better future for mankind.

Readers can follow Ivan The Troll on Gunstreamer at https://gunstreamer.com/@IvanTheTroll

Being Honest about Tiananmen Square

No, a Suppressed .45 Pistol Doesn’t Sound Like a Nail Gun