Why Self Defense Training Matters

U.S.A. –-(Ammoland.com)- Fear and panic are hard to understand. The assumption is that the same thinking-mind we’re using now will be available if we’re attacked. In fact, our memories are jumbled when we’re frightened. Words escape us and we can’t think clearly. That happens to us when we face a lethal threat. Fortunately, we remember how to act even though we forget how to think. That is why firearms and self-defense training is critically important. Let’s contrast two recent example of armed self-defense. An attack at home showed the benefit of a planned response, while an attack on the street showed the benefit of recent training.

You only have the solutions you planned and practiced.

You are a woman home alone. It is almost ten in the morning when you hear someone banging on your front door. You don’t recognize the visitor, so you don’t open the door.* A minute later you hear someone trying to get into your house through your back door. That seems suspicious, so you retreat to a back room in your home.* You get your gun*, hide in a closet*, and call 911. You’re talking to the police when the intruder opens the closet door. You shoot him several times.

You can’t think and make plans as someone is breaking into your home. You can perform the actions you planned and practiced. Let’s give this woman credit for her safety plan.

This attacker had twelve prior felony convictions. Some criminals want what to take what we have. This criminal searched out and confronted the female homeowner.. and may have wanted to take more. Have you practiced running away from danger? 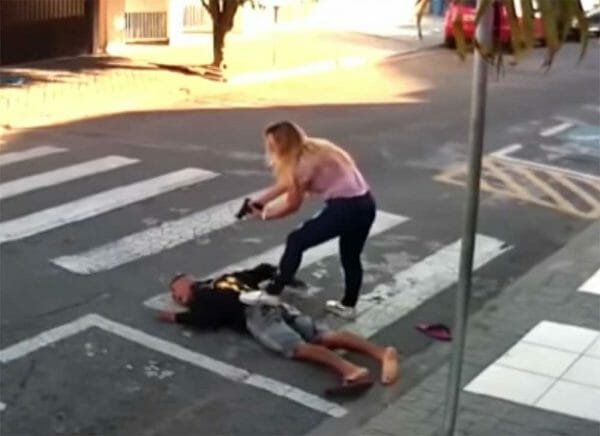 You’ll only have the responses you practiced.

You have your Illinois concealed carry license. You’re armed and you’re well trained. You present your gun from its holster. You shoot the criminal until he stops shooting at you and your son. You rush your son to your vehicle and hand him to your friend. You check to make sure your son is uninjured. Then you call police while keeping your eyes on the bad guy.

There is a difference between knowing what to do in the calm of the evening, and being able to act under extreme stress. The part of your brain that recites lists stops working when we’re attacked. Fortunately, this defender was very well trained.

This defender made all the legal preparations to go armed in public. He practiced carrying a concealed firearm. He trained to step between his loved ones and an attacker. He practiced presenting his firearm and shooting accurately. By coincidence, the defender was on his way home from a multi-day defensive firearms class and had recently fired thousands of shots in training. He also trained to stop firing when the threat stopped. He practiced moving his loved ones to safety. His training included interactions with the police.

This attacker was a convicted felon and gang member. It was illegal for the attacker to have a gun. Have you taken the training and secured the permits to carry your self-defense tools in public?

Have a plan to retreat. Train to defend your life when you can’t retreat. I want you to protect you and the people you love. Please plan on it. Please practice it.

I write and talk about self-defense every week. These events were discussed on episode 154 of Self-Defense Gun Stories. Links at the podcast page.

The original article is here. Rob Morse writes about gun rights at Ammoland, at Clash Daily, and on his SlowFacts blog. He hosts the Self Defense Gun Stories Podcast and co-hosts the Polite Society Podcast. Rob is an NRA pistol instructor and combat handgun competitor.

May NICS Totals Up Slightly From 2018

Freedom Haters Repeat After Me – There Is No Debate!

Freedom Haters Repeat After Me – There Is No Debate!