U.S.A. -(Ammoland.com)- – On 5 May, 2019,  Ashley Gribble was walking in the woods with her five dogs. She had bear spray. She encountered a black bear that exhibited typical predatory black bear behavior.

The bear kept coming, even after the bear spray was used.   Fortunately, one of Ashley’s dogs, 80 pound Bane, jumped between the bear and Ashley. Here is some of Ashley’s account from facebook:

I was able to discharge my bear spray but it did not stop the bear. At this point I’m yelling and backing up while the dogs are barking. As I do so, I fell backwards over a rock. When I was on the ground, the bear just a few feet from me, lunged and I prepared myself for a bite. It was at this moment that my dog Bane lept in front of me and the bear attacked him instead.

This bear picked my 80lb dog up like a stick and proceeded to run with him for a short distance. They grappled, Bane was able to get free and run but then the bear chased him like he would chase a deer, grabbed his behind, bit into his back, covered him with his body and pinned Bane. I’m screaming and yelling help and then before I even knew what was happening, with adrenaline surging through me, my instincts were taking over and I was running full tilt at the bear with a log. I proceeded to beat that bear in the face and head with the log repeatedly, specifically aiming for his eyes and nose. Finally, after about a dozen blows, the bear released Bane and he was able to flee back to the other dogs to safety.

Okay great Bane is safe but now the bear and I were face to face. And right about now I’m wondering WTF did I just get myself into. I screamed as loud as I possibly could and banged the log against the trees beside me. The bear stared at me for what seemed like forever and then for whatever reason the bear decided to give up and slowly retreated up the slope behind him as I backed my way out of the trees towards the waiting dogs.

Fortunately, Ashley’s and Bane’s actions were enough to stop the attack after the bear spray did not.  The bear had followed Ashley and the dogs for 15 minutes before the attack. The bear had approached to within five feet of Ashley as she attempted to disengage. The dogs had not provoked the bear; the bear did not chase the dogs back to Ashley. Ashley’s dog, Bane,  survived 26 puncture wounds from bites and claws, and is recovering.

Ashley is convinced, if not for her dog Bane’s actions, she would have been mauled, and likely killed.

This case occurred in British Columbia, near Kamloops, about 250 miles North East of Vancouver. Guns are tightly controlled in Canada, generally, and in British Columbia, in particular. It is almost impossible to obtain a permit to carry a handgun, and unlikely the carry of a long gun, outside of hunting season, would be allowed.

This case shows how useful a handgun would have been. A handgun is no more difficult to carry than bear spray. There were multiple times a handgun could have easily been used to dispatch the bear, or at least frighten it off. In a similar case in Alaska a few days ago, a warning shot was fired at the bear, which then disengaged.

The second report happened on Monday, closer to McHugh. Battle says in that case, hikers reported seeing a bear above them on a hill. It reportedly circled around and got close to their dog. One of the hikers fired a warning shot with a pistol, driving the bear off.

That bear was not found. Authorities are warning people not to use the Turnagain trail because of the danger of the black bear in Alaska.

In Ashley’s case, the authorities found the offending bear and killed it. It was simply too dangerous to have in the vicinity of people.

A better outcome would have been for both bears to have been shot and killed by the people they were stalking and exhibiting predatory behavior toward.

There would be no question about whether the right bear was killed; there would be no expense of searching for the bear; Ashley’s dog would probably not have been injured with significant veterinarian bills. 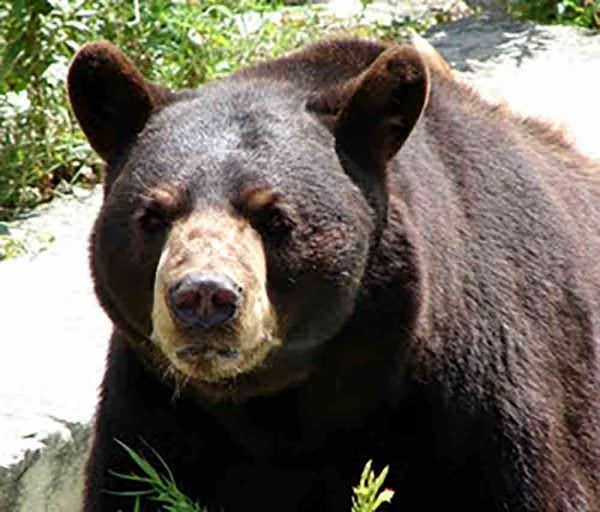 It may be the largest concentration of black bears in the world. The bear population is thriving.

It makes sense for a person attacked by a bear to kill the bear at the time, rather than hope for the best, and hope the authorities, at great expense in time and money, find and kill the bear later, before it severely injures or kills someone.

Bear hunt outfitters do a thriving business in B.C. It makes no sense to use save a dangerous black bear, that has become acclimated to humans, so the government can sell another bear hunting license.

It is good to know that Ashley and her dogs survived. It is worth noting only one dog stood up to the bear, even though there were five of them with Ashley.

It is difficult to determine the size of a bear from a picture. The bear was described as a mature male. The B.C. government says adult males weigh 80 to 300 kilograms. The middle of that range would be 190 kilos, or over 400 lbs.

Perhaps readers who deal with bears more than I can look at the bear picture and make an estimate. Ashley also has some video of the encounter at her facebook page.

Disputed Facts in the Gun Debate