See parts one here and two here. In this issue, we’re going to take a look at two European powerhouses, HK and SIG SAUER. Both had a huge marketing presence in the 80s and 90s and both were highly sought after then, just as they are today.

They were different in style, but both were rich and detailed and would be something worthwhile to hang up in an office of gun shop today.

HK was and is what many think of when it comes to German engineering in firearms back in the 80s and 90s. They were a force in marketing, going so far as to using actual photos of MP5-wielding British SAS troops storming the Iranian Embassy during Operation Nimrod.

HK made a name for themselves with their very aggressive ads. But they also had a commercial hunting side too and did some very colorful pieces in the 80s.

Here HK shows off their gas operated pistol, the P7, claiming it’s the most advanced and expensive pistol in the world and perfect for law enforcement work. They heavily pushed the P7 in the 80s. This ad is a little cluttered and looks more like an owner’s manual than a promotional piece. Also, trying to advertise why it’s expensive isn’t really a good thing. A classic 80s era ad with the SL7 paired with a P7 and a USAF survival knife. The ad shows that the modern outdoorsman could use some military-styled guns for excitement and adventure. A rebate promo ad showing off the HK 630 and 770 in a simple, but artistic layout. The appearance of the rifles just floating there were a classic touch. 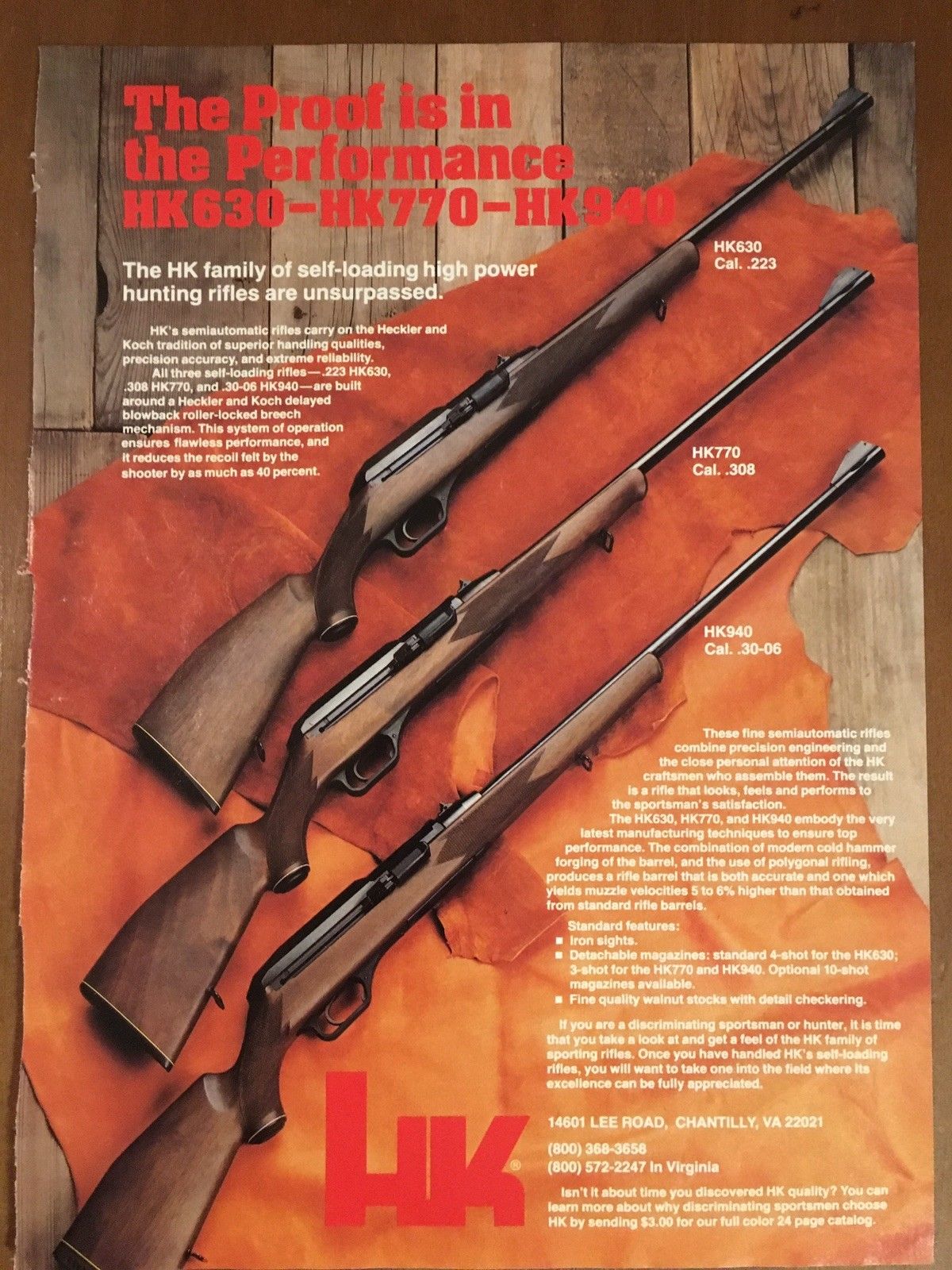 Another classic outdoorsman appeal with all three HK roller lock hunting rifles on tanned leather and wood planks. The effect makes it appear these are the guns someone in their mountain cabin would use for hunting. The 90s are here! HK was famous for having their employees pose while wearing Oakley goggles and black BDUs. The coloring and smoke just add to the effect. This USP Compact looks simple, more like a press release rather than a gun magazine ad. The white background makes the gun and bright red HK logo pop. Here we have a nice ad for the HK91 with all of the common accessories that come with it. Sling, cleaning kit, 20-round magazines, and bipod. The roller lock rifle was a big seller in the ’80s and ’90s and this ad shows why. Simple but effective. 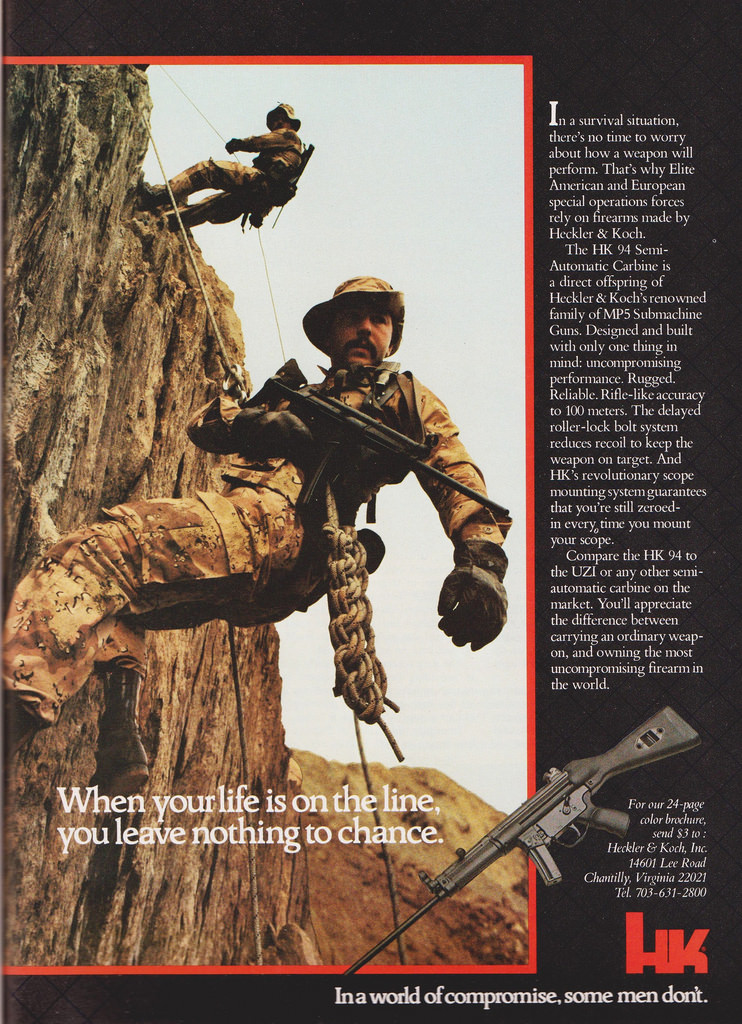 The HK MP5 is what nearly everyone visualizes when they think “HK.” The HK94 rifle shown here attempts to live up to that. Even though it has a mandated 16″ barrel, that doesn’t stop the reader from living life on the edge and being the SPEC-OPS commando you really want to be when you buy one. Artfully done in my opinion. Another classic HK ad with black BDU-clad SWAT guys. This time showing off the MP5 and MP5SD as the perfect long guns for police. The face camo is the best touch. The 80s were all about survival and here HK says that “YOU CAN SURVIVE”…if you own a HK91 rifle. A coil of rope, a sunken log and a dude waist-deep in a swamp says he’s ready to fight off the Red Dawn invasion.

Another major player in the 80s and 90s. SIG did very well marketing their pistols towards law enforcement. Yes, the US Navy would eventually select the P226 for the SEALs, but back then, their bread and butter was all about snagging those LE contracts. This ad is just so colorful and full of visual stimuli. The colors, the setting, and layout are all so eye-grabbing. The ad showing a plain clothes cop getting ready to bust two burglars in what could be any metropolitan city in North America resonates with the reader. The punk standing guard with the mullet and headband make it awesome. Another LE-specific ad. This shows a seasoned patrol officer on a traffic stop with a holstered P226. The ad gives a sense of suspense due to the officer approaching the stop with caution. The ad tells the reader that if this traffic stop goes kinetic, the SIG P226 is ready and capable. A simple ad telling the reader that SIG pistols are worth the wait, no matter how long it takes. Another simple ad. The colors and bright background are a nice contrast to the P220. The purple lettering lends a bit of regal flair with the fact that it is advertising the P220 chambered in .38 Super, a round they’re associating with an elite class of educated shooter. The classic SIG technical spec layout. A cutaway of the P22x series showing off the advanced design. This SIG Pro ad is nice because of the crossover of the pistol from the black background for the text to the gun laying on a SIG branded padded case with a leather-tagged Sig key fob. Another simple ad for the P228. Here the blue accents used to highlight the model numbers make it visually pop for the reader. Another classic cutaway ad. This looks more like something you’d find in an armorer’s manual than in a gun ad. But it comes across well since SIG is trying to show the advances of the SP line over the traditional P22x line.

In Part 4, we’ll take a look at two American names known for their revolvers and the direct competition they had against one another.

In Praise of the Absence of a Manual Safety