U.S.A. –-(Ammoland.com)- In a dramatic reversal of numbers, the March 2019 National Instand background Check System (NICS) check numbers are the second highest March on record, only a few percent less than the record breaking numbers in March of 2018.  February numbers had shown a dramatic downturn for NICS checks.

The Trump era NICS continue to be at historically high levels, but lower than during the rush to buy guns during the last two years of the Obama administration. These numbers do not translate directly into gun sales. A large part of the numbers are from NICS checks done for carry permits and carry permit rechecks. 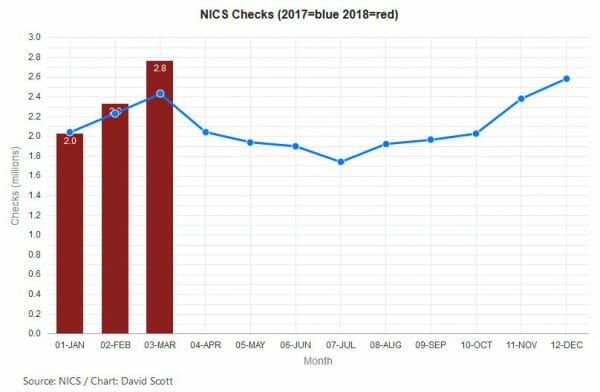 It is to be expected as more and more carry permits are issued, permit rechecks will eventually catch up to permit numbers, and eventually exceed them.

It is likely that the Democrat takeover of the House, and the introduction and passage of several bills to restrict firearms sales and to ban classes of firearms, that there would be a bump up in sales in March. I predicted as much last month.

With permits and permit rechecks, and with the increasing numbers of permit holders who do not need another NICS check in order to buy firearms from federal dealers, in 25 states, the NICS checks are becoming less correlated to firearm sales.

The number of NICS is likely to correlate to over a million new sales to private purchasers in March of 2019. We will not know exactly how many firearms were added to the private stock for about a year.

The estimate of the current private stock, based on firearms sales, firearm imports, firearm exports and firearm manufacture, is about 433 million firearms in private hands in the United States at this time.

Firearms included in the estimate totals are all those produced and imported, as estimated since 1900. Those estimates were recorded by previous researchers Newton and Zimring, and updated by award winning scholar Gary Kleck  through 1987.  The Kleck numbers are available in his book, Point Blank: Guns and violence in America.

Since then the number has been updated using reports from the BATFE.

While the firearm sales are lower than they were in 2013 and 2016, they are still higher than in 80% of the years that NICS has been in existence.

With the current rate of increase, there should be 500 million privately owned firearms in the United States sometime in 2024. Those numbers are largely in line with the estimates of firearm numbers reported by the Small Arms Survey, an international group based in Switzerland.