USA – -(AmmoLand.com)- While the media has been hyper-focused on bad gun control bills at the national level, the reality is that good things are happening around the country.

Rep. Christy Zito authored the bill, which was also pushed inside the state by the Idaho Second Amendment Alliance.

Idaho already had Constitutional Carry, but only for those who were 21-years-old and above. So the new law in the Gem State will drop the age for permitless concealed carry for those who are 18-years-old.

Idaho is not the first state to improve its concealed carry laws this year.

This brings the total number of permitless carry states to 17.

GOA is pushing legislation to deregulate suppressors and allow gun owners to purchase them, as they would any other firearm accessory.

And at the state level, GOA is supporting legislation to decriminalize the possession of suppressors.

For example, in Texas, HB 2286 would keep state officials from arresting any gun owner who possessed a suppressor without paying the NFA tax.

To help mobilize grassroots support, GOA’s field director Rachel Malone produced a “myth buster” video where she takes on three of the most common misunderstandings relating to suppressors. Her video also calls for grassroots action in support of national legislation to deregulate suppressors.

Gun owners can view Rachel’s video here and expect an alert soon in support of legislation in Congress.

Gun Owners of America is fighting red flag gun grabs and Universal Background Checks all across the country.

So far, the majority of states have refused to pass new gun control laws.

But then there’s those states that have been overrun by anti-gun Democrats. They are shredding the Constitution and ramming new gun restrictions into law.

And it’s in these states, that pro-gun counties are restoring the rule of law by passing Second Amendment Sanctuary Ordinances.

In all, over 130 counties across the country have declared themselves to be Second Amendment sanctuaries, and over 200 have stated they will not enforce red flag gun confiscation orders.

GOA is actively working to get more counties to pass Second Amendment Sanctuary Ordinances. A sample can be viewed here. And we have long encouraged sheriffs to uphold the Constitution and refuse to violate their oaths of office. 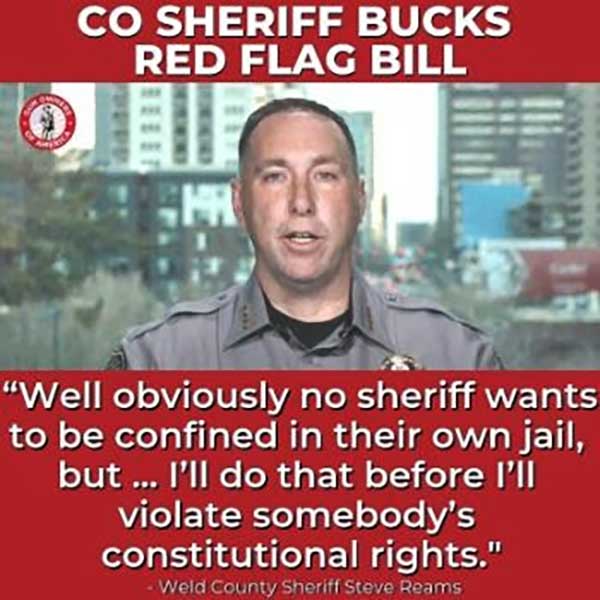 When the legislature in the Centennial State recently passed a red flag gun grab, Sheriff Reams publicly announced that he would not enforce the unconstitutional law.

Sheriff Reams said: “Well obviously no sheriff wants to be confined in their own jail, but … I’ll do that before I violate somebody’s constitutional rights.”

Senate filibuster to go the way of the Dodo Bird?

Finally, GOA activists who have Republican Senators received an emergency alert this week.

The topic was “saving the Senate filibuster from extinction.”

On Wednesday, Senate Majority Leader Mitch McConnell forced a vote to reduce the amount of time allowed for debate on most presidential nominations — after a filibuster is defeated — from 30 hours to 2 hours.

To many, this might seem like an “angels dancing on the head of a pin” type of debate. The reality is that Sen. McConnell successfully forced a change to the Senate rules which govern the filibuster.

This now continues the erosion of one of the greatest tools that we have used to defeat gun control legislation over the past several decades.

And the one thing all these victories have in common is that they have died in the Senate as a result of the filibuster.

Weakening the filibuster, as the Senate did this week, could very well grease the skids for gun control after 2020.

Already, the New York Times is relishing the fact that what Republicans did this week will allow “progressives [to] push bold plans — ‘Medicare for all,’ the Green New Deal, gun-safety measures, and so on — impossible to realize under the current system without a Senate supermajority.”

Some Republican offices are trying to split hairs by claiming that the rules change this week only affects filibusters of presidential nominations.

But GOA’s Legislative Counsel Michael Hammond countered these misguided Senate offices, showing that it’s a huge mistake to assume that what happened this week will have no impact on the legislative filibuster:

Senators who regularize the use of “cheating” in order to get their way in the Senate have no ability to set limits on others proposing to use the same sort of “cheat scheme.” Harry Reid tried to do this in November, 2013, when he tried to “nuke” nominations — but to exempt Supreme Court nominations.

He soon found out, to his dismay, that you can’t say “It’s alright to cheat, but only in the ways that I cheat.”

For more information on this issue, interested readers can view a three-page memo that GOA’s Legislative Counsel Michael Hammond provided for Senators and their staff.

Also, gun owners can view the two Senate votes on this subject here and here, where “aye” was the correct vote.

The only Republicans who broke from McConnell and voted to keep the filibuster (and subsequent 30 hours of debate) at full strength were Senators Mike Lee of Utah and Sue Collins of Maine. They should be thanked.

About Gun Owners of America

Erich Pratt, or another GOA spokesman, is available for interviews. Gun Owners of America is a nonprofit lobbying organization dedicated to protecting the right to keep and bear arms without compromise. GOA represents over 1.5 million members and activists. For more information, visit GOA’s Newsroom.

Gun Rights Group Buzzes Maryland Capitol: WE WILL NOT COMPLY