U.S.A. – -(Ammoland.com)- “If you post it on social media, that’s probable cause for us to come get the guns out of your house,” Democrat Florida State Senator Jason Pizzo proclaimed in a Facebook video three years ago. “That’s it. It’s now on you to explain why you have a gun in your house and why it’s on social media…”

He was stumping at the time to change the law to deny the right to keep and bear arms to young adults old enough to vote, marry, sign binding contracts and serve in the military. Pending that, he wanted parents to call the police on their children if they saw them posting pictures and videos with guns online.

There’s no question that if you’re a parent and have a dependent child in your home, what they are doing, what they have access to, and what goes on under your roof are your business. How you handle that parental authority is your call, or it should be. Depending on circumstances, alerting the police may be a viable option. Just be aware that their vested interest in their own safety, and the protocols they will follow to ensure it, will take precedence, and you may come to regret that you didn’t try to resolve matters another way.

Fast forward to the present, and the new climate in Florida where even some Republicans are scrambling to support citizen disarmament edicts. Pizzo is now pushing a bill that, along with “lock up your safety” infringements, makes “posting or publishing of a picture of a firearm, BB gun, air or gas-operated gun, or device displayed to resemble a firearm to social media” by minors a criminal act that will result in guns being “promptly seized by a law enforcement officer and disposed of,” and other penalties.

Note this time he’s not asking parents to do the snitching. Apparently, the mere existence of a noncompliant post will be enough “probable cause” to prompt a raid.

“This is an obvious First Amendment violation,” law professor Eugene Volokh observes. “The statute isn’t limited to displays that constitute true threats of violence (there’s a First Amendment exception for such true threats), or possession of guns by minors in violation of state law. Indeed, it would be a crime for a minor to post a photo of himself lawfully using a gun at a shooting range.”

That’s similar to what happened to student and “March for Our Lives” critic Kyle Kashuv when he went to the range with his father, posted photos on Twitter, and found himself snitched on by the antis, then summoned, isolated, interrogated and intimidated by the same school authorities who proved useless during a real threat.

If Pizzo’s wish to enact this abomination came true, there would be plenty more “opportunities” for young people to run afoul of his demands. Time Magazine reports “High School Shooting Teams Are Getting Wildly Popular,” and posting photos and videos on social media is essential for publicizing, networking, recruiting and just plain sharing.

What those demanding ignorance instead of education won’t tell you is that the U.S. Department of Justice in its 1994 research summary “Urban Delinquency and Substance Abuse – Initial Findings,” concluded (p. 18):

“Boys who own legal firearms, however, have much lower rates of delinquency and drug use and are even slightly less delinquent than nonowners of guns.”

That’s been borne out by today’s crop of young, trained and disciplined shooters, and was an accepted and expected way of life back in the days before school shootings.  It recalls for me an article I wrote some years back about such a team that included a photo that Pizzo’s bill would prohibit, along with commentary from my source: 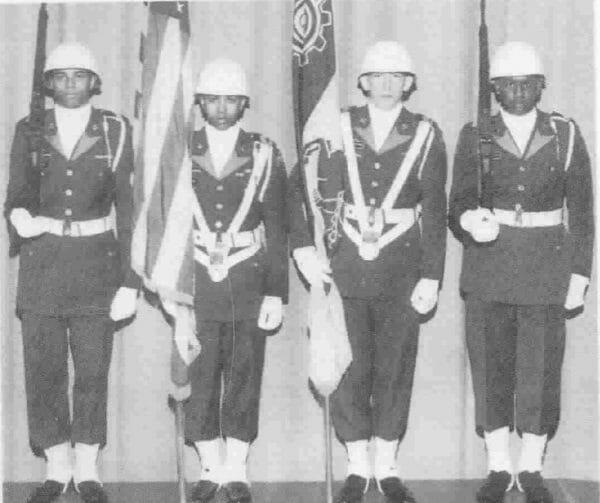 What kind of paranoid mind would want to ban this?

“Here is an attached photo of me as a member of the Chicago Vocational High School ROTC color guard circa 1968.Note that [names redacted] are shouldering a firearm that Gen. George S Patton called the ‘greatest battle implement ever devised;’ the US Rifle M1 caliber .30-06 a gas operated, clip fed, air-cooled semiautomatic shoulder weapon weighing 9.5 lbs. Yes that one, the primary infantry shoulder arm that won WW II.

“Our HIGH SCHOOL armory had 50 of these, two Browning Automatic Rifles, five M1 carbines, two .45 cal. semi auto M1911A1 pistols, and one M3 submachine gun. Similar armories were present at even INNER CITY High Schools like Lindbloom, Marshall, Farragutt and most every school that had a junior ROTC, and there was NEVER a school shooting or any one harmed by the presence of these lethal military weapons.”

So what about Pizzo’s concerns? Surely we can find examples of young people posting on social media where they are being dangerous and threatening with guns.  Case in point: Check this moron out.

No one is saying that if someone does something disturbing on social media that it doesn’t merit further attention. No one is saying such behavior should just be ignored. But lumping all gun owners in with the minority of abusers is what the citizen disarmament lobby does. Those of us who would pass the right to keep and bear arms on to the next generation will have none of it.

It’s not going to end with us, as much as that’s the plan with the control zealots. And we note that, not content to disregard the Second Amendment, the collectivists are bent on subverting the First (and more).

“This is not about politics,” Pizzo disingenuously claimed in the video where he unveiled his intolerable scheme.  Of course it is, and it’s about exploiting a hot button issue with a cheerleader media to get his name and face out there in front of the voters. Per the Miami Herald, the “wealthy former prosecutor” found it desirable to spend $1M of his own money to unseat a “scandal-plagued” Democrat opponent to run for a seat the Republicans didn’t even contest. The job only pays $29,697 per year with a $152 per diem based on days in Tallahassee, so it’s hardly out of line to assume he has personal goals and that politics is the vehicle he is using to achieve them.

Such deception plays in Democrat strongholds where Democrat constituencies break Democrat gun laws to overwhelmingly shoot other Democrats. The rest of us ain’t buying it.

David Codrea is the winner of multiple journalist awards for investigating/defending the   RKBA and a long-time gun owner rights advocate who defiantly challenges the folly of citizen disarmament. He blogs at “The War on Guns: Notes from the Resistance,” is a regularly featured contributor to Firearms News, and posts on Twitter: @dcodrea and Facebook.

After Nationwide Power Cuts and Looting, Venezuelans Regret Giving Up Their Guns Even More