6 of the Best .32 ACP Pistols to Buy and Collect

Believe it or not, there are still a few .32 ACP pistols still being made and ammunition for, them too. The .32 ACP was once one of the most popular concealed carry and law enforcement rounds sold, though it’s inadequacies have been laid bare in the modern era.

I wouldn’t suggest .32 ACP semi-auto pistol for concealed carry, and neither would most experts, if you had any choice in the matter. A .32 pistol will work in a pinch, of course, but so will .22 LR, though you probably don’t want to rely on that. Shot placement, as always, matters most, but the evidence has been in for some time that .380 ACP is generally considered the bare minimum for a self-defense gun if you can’t carry a 9mm.

But that doesn’t mean there isn’t a market for guns chambered in 7.62mm Browning. Not only are they small and light recoiling, there are some seriously collectible (and cool!) guns in this chambering. For the collector and enthusiast (and the carrier, too), there are some great guns out there.

Here are six .32 ACP pistols that are well worth a look.

Primus inter pares among .32 ACP pistols is and always will be the Colt Model 1903, a single-action semi-automatic pistol with a shrouded hammer. Originally called the Pocket Hammerless, it was designed by John Moses Browning during his tenure at Colt.

It was a very popular carry pistol in the early 20th century in the US and elsewhere, as it found global adoption for civilians, police and military officers. (Al Capone, John Dillinger, and both Bonnie and Clyde were fans.)

If you can’t afford a collectible original Colt 1903, US Armament Corp. began manufacturing them under license a few years ago, so you can actually buy a new one, though it will cost you. MSRP starts at $1275.

Of course, if you want to get deep into collecting, there are a couple of fantastic German models to keep an eye out for. First, of course, is the Walther PP, PPK and PPK/S, models designed to meet requirements for import and sale in the United States under the Gun Control Act of 1968.

The Walther PP pistol series was first offered in .32 ACP (labeled 7.65mm Kurz) and issued in this chambering to numerous police officers and later to military personnel as well as the Nazi high command. (Hitler killed himself with one, which is a pretty good reason to own one.)

The PPK was also famously the concealed carry pistol of choice of James Bond. These days, Walther prefers to sell them chambered in .380 and .22 LR, but vintage models can be found in .32 ACP as well. A related design is the SIG SAUER P230 and P232, which are basically PPK clones though they are slightly larger for better control. SIG made them mostly for plainclothes police, but it did gain some traction in the US concealed carry market.

Just like the PPK, the two-tone stainless finish P230 and .380 P232 are hammer-fired DA/SA subcompact. But unlike the PPK, they have SIG’s de-cocking lever on the grip instead of Walther’s slide-mounted de-cocking safety. Models in .32 ACP are more rare, but since the P232 was in production until 2014, you shouldn’t have trouble sourcing one. 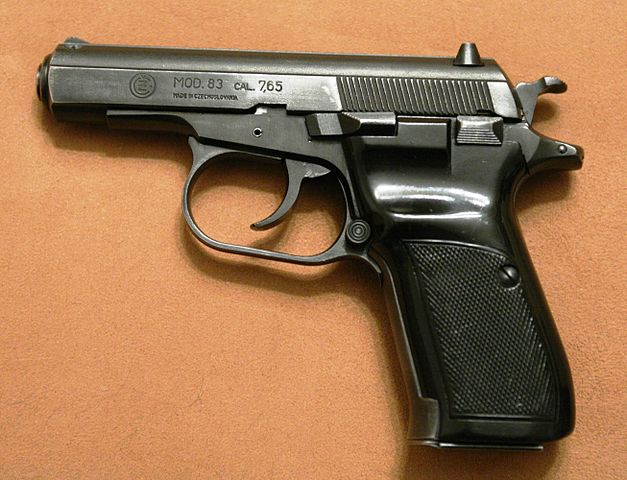 Another model to Czech out (ha!) is the CZ 83, which was offered in .32 ACP. The CZ 50 and CZ 70 (also .32 ACP pistols) are somewhat common on the surplus market as well, but the 83 is the better buy. First, it uses a double-stack magazine (15+1 of .32 ACP!) and was in production until 2012, so you can get one in pretty decent condition. It has Walther PPK design elements, such as the fixed barrel and blowback operation, but has CZ’s control scheme of a manual safety rather than a decocker. The Beretta 81FS is still in very much in production, marketed as the Cheetah, though .380 models are easier to find that .32 ACP/7.62mm. The 81 is a double-stack compact, though a single-stack with thinner grip (the 82) can be found on the used market. It holds 12+1 of .32, with Beretta’s operating system.

It’s basically a ⅞ scale 92FS, replete with the open-top barrel and slide-mounted ambi de-cocking safeties. The Beretta 3032 Tomcat can also be had in this chambering if you prefer a topo pistola.

Of course, some people just want a light weight .32 caliber pistol that goes “bang” and don’t care about history or collectibility. If that’s you, Kel-Tec still makes the P-32 pocket pistol, a polymer-framed internal-hammer double action only mouse guns that holds 7+1 rounds of .32 ACP. The Kel-Tec P-32 has reduced pull weight of under 6 lbs, a decent trigger and a tiny 2.7-inch barrel length. MSRP is an affordable $325, but you’ll find them at retail for a song.

Any other .32 ACP pistols you feel should be added to the list? Sound off in the comments!

Will Diversity Be the Death of the Democrats?

Alabama Moves toward Constitutional Carry in 2019

Alabama Moves toward Constitutional Carry in 2019