Borderline Shooting And Bloomberg Threw A Party to Celebrate

Borderline Shooting And Bloomberg Threw A Party to Celebrate

USA – -(AmmoLand.com)- The Borderline Shooting. A cause for celebration? How about the facts.

The anti-gun left has hosted a prep-rally to celebrate the shooting that took place at the Borderline Bar and Restaurant. What is wrong with these people? Friends of mine who lost family were told not to come as this was a gun control rally, not a memorial.

Infact all they did was chant F**K TRUMP, and F**K the NRA.

Held at a local school, and packed with children to fill out the seats it looked more like a Hitler Youth Rally than a memorial.

One of the stated goals, according to organizers was to raise support for ending the gun show at the local Ventura County Fairground and forgetting the fact that in CA you cannot buy a gun in CA at a gun show. Their bigger goal is to “destroy the gun culture in Ventura County.” In case you’re wondering all the local liberal politicos were there to celebrate the mass shooting.

So, what happened at the Borderline? Why would ANYONE celebrate it? Here is what I’ve been told. 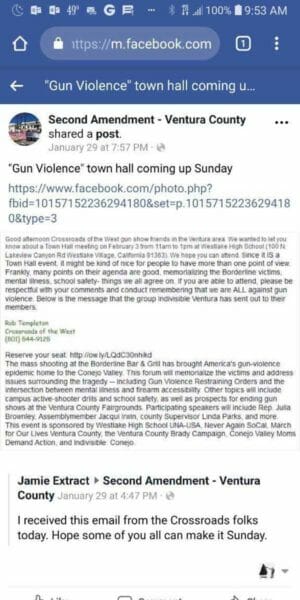 The fact is a disturbed young man went on a shooting spree. But it’s more than that. In April of last year, the local Sheriffs interviewed him. Declared him competent to own a gun.
The Shooter chose the Borderline because it was a gun free zone. In CA Gun Free includes on and off duty law enforcement. Even with 10 or so law enforcement officers in the building, they were more than likely unarmed to comply with the business owners request. They left their firearms in the trunk of their cars.

The shooter didn’t just randomly shoot people after they were down several were executed by the killer. He was shot while on the ground, executed in cold blood. There must be some history there as the shooter selected his targets.

The Shooter saw on security cameras when a local patrolling sheriff arrived — Ventura County Sheriff’s Sgt. Ron Helus was ambushed by the shooter as he entered the building.

This brave man never had a chance, the shots that hit him forced him into the path of shots fired by a CHP officer. The CHP officer had no way of knowing about the shooter’s ambush. The officer went in and is a credit to the community. One can only imagine the misplaced guilt this excellent officer carries.

Had any of the law enforcement inside been armed the death toll would he been a fraction of what was. Sgt Helus would be alive today. Still a tragedy, yet another a loss that could have been avoided. But, a LOT less deadly than what happened if peaceful people had been armed.

As it was the law enforcement on the scene broke windows and lowered people as best they could to the ground. A few officers took the 18-foot drop out the back to help people who had fled the building through the broken windows. They treated sprains and broken legs while others stood tall to the end making sure as many people were saved as possible.

Like so many tragedies before there were MORE than enough warning signs for this to be prevented. Why we keep allowing mass shooting is a mystery to me. We do allow them when all the signs are there, and we elect to do nothing.

So tell me what is there here to celebrate? NOTHING! Using the loss to families and community to promote your political agenda is so fundamentally wrong as to be unthinkable to most of us, but not the anti-gun left.

Once again it is a Blomberg backed group passing out the party hats and serving the cake to celebrate murder. These people have no souls; they stand on the bodies of the dead to better scream their hate.

So PARTY ON you sickos.

It’s Time for Ingrates to Go