Tiny little single stacks are all the rage these days, but the original sub-compacts (or “SubKompacts” if you’re a P30SK) were basically just chopped grip versions of their duty-sized counterparts. Not that there’s anything wrong with that! The width and weight often make them easier to shoot well, and given the option to have more ammo on board, ain’t nobody choosing otherwise.

HK’s P30SK is a very comfortable pistol in the hand. Nice curves provide an ergonomic palm swell on the grip’s sides and backstrap. Highly adjustable, too, with separate Small, Medium, and Large side grip panels and backstraps to fit any hand and grip size and shape preference.

The curly Q grip texture is easy on the hands and love handles, but still provides decent purchase. I’d personally prefer slightly sharper edges on that texture as the bite isn’t quite there if hands are sweaty or otherwise slick. Of course, DIY stipplers should rejoice! Since the grip panels are easily swappable and can be purchased separately for between $3 and $15, home stippling experimentation is practically risk-free. Finger grooves are fairly pronounced, but for my hands they’re just the right size and in the right locations. Generally speaking, though, the market has moved away from finger grooves because, if they don’t work for your hand size, they can be quite annoying. 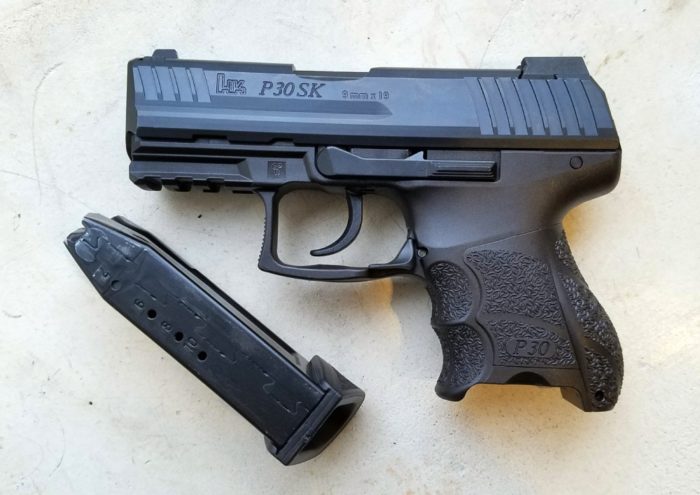 Extended magazines with a capacity of 13 or 15 rounds are available. P30SK magazines are compatible with HK VP9 and VP9SK mags. On the LEM model, which I’ll go ahead and call a two-stage, single action trigger with double action capability, the only external controls are an extended slide stop and a paddle-style magazine release. These controls are mirrored on both sides — fully ambidextrous. As much as I like the idea of rearwards-extended slide stops — great for those with smaller hands — I have a hard time not riding them on the left side of the gun. Whether it’s my strong hand thumb or the pad of my support hand, I tend to prevent the slide from locking back due to blocking the slide stop’s ability to move upwards. As for the paddle magazine release located on either side of the rear of the trigger guard, I don’t find it as quick or as intuitive as your good ol’ American thumb button, but it’s something I get used to and can operate more than easily enough after practicing for a while. I do appreciate that it’s out of the way and ambidextrous. Actually, some of the reason it isn’t as easy for me as a thumb button is, once again, due to my large-ish hands. I have to contort my trigger finger or, as is usually my preference, my middle finger back pretty hard to get it close enough to depress the mag release. It usually involves a slight shift in my grip, too. Unfortunately, it’s too far to reach with my thumb but too close to reach comfortably with those other fingers.

Another option is using one’s support hand to pull down on the magazine release levers, either by pinching them between thumb and forefinger or just with one’s thumb. Since the support hand is headed downward to grab a new magazine anyway, quite possibly with a stop to strip out the empty(ish) magazine on the way (though the P30SK’s pop clean out without assistance), adding a magazine release detour isn’t asking a whole lot.

Still, I usually end up going with the middle finger technique. YMMV. So the elephant in the room here is this P30SK’s LEM, or Law Enforcement Modification, trigger and its “light strike V1” setup. Heckler & Koch calls this a DAO (double action only) trigger, but it is not. Though it sure looks the part.

Which I think is the point. Law enforcement can carry a gun that doesn’t appear to be “cocked and locked” all aggressive-like. An at-rest hammer is so much calmer and more civilized looking.

But don’t let it fool you. The P30SK LEM is cocked. Oh yes. Though the hammer may be down, the hammer spring is almost completely cocked. Pulling the trigger rearwards offers almost no resistance. The hammer begins to “cock,” but the only spring you’re working against is the trigger return spring. The slide’s previous cycle took care of cocking the actual hammer spring.

At the point seen in the photo above, you’ve pulled through what feels precisely like a first stage in two-stage trigger and have stopped against the sear. Now, about 5 lbs of pressure is required to cock that hammer another millimeter or two and trip the sear. The feel is almost identical to that of the single action mode in the DA/SA variants of the P30SK (and other P30 models).

Should that hammer fall on a dud round or an empty chamber (or for whatever other reason the slide doesn’t cycle and cock the hammer spring), the P30SK LEM’s trigger still works in a standard, double action manner. While everything looks the same externally, as soon as you touch the trigger you know something’s different. Instead of moving rearwards with only the trigger return spring feebly fighting you, you’re also responsible for cocking the hammer spring. It’s a full-on, stiff double action trigger clocking in at close to 11 lbs.

Like I said earlier, the LEM trigger is truly a two-stage, single action trigger with backup double action capability. Although the HK P30SK LEM is always in a single action mode, the single action trigger leaves something to be desired. It’s a tad spongy with some creep and some grit, and the break point is a bit vague. Ultimately, it hurt my slow fire accuracy.

Interesting touch: even the bobbed P30 hammer used in the LEM here is a two-piece affair, with the rear half made of black rubber. I’m not entirely sure why, since there’s no manual manipulation of this hammer taking place, but okay. I like to touch it. Though I didn’t find the P30SK LEM to be an easy gun to shoot accurately — due both to that trigger, which I kept thinking was going to fire before it actually did, leaving me fighting a desire to flinch, and a fairly snappy recoil impulse — it fared pretty well anyway. Taking care and shooting offhand at seven yards, five-shot groups were plenty tight for government work. Field stripping and reassembly isn’t as straightforward as many modern pistols, but I had it figured out sans owner’s manual in short enough order to avoid frustration. A captured recoil spring — or dual recoil spring setup, as it were — is always handy.

As you’d expect from HK, everything is very well made. Fit is precise, machining is good, and finish is even and durable. At 1.37 inches thick, the P30SK is a relatively chubby little beast. At least as far as concealed carry norms go. It feels great in the hand, though, and with the flush-fit magazine baseplates will hide quite nicely under most clothing.

The entire P30 line has earned a solid reputation for reliability and durability, so it will unquestionably serve well. My well-used loaner from The Range at Austin was no exception. It ran like a top for me across five different brands and types of ammunition, including two hollow point loads.

At the end of the day, though, I’m not entirely sure where the P30SK fits in the concealed carry spectrum. There are skinnier, smaller pistols with the same capacity that I shoot more accurately more easily. And, while the LEM trigger system is novel, I don’t see a purpose to it for non-LEO carry. I’d choose a standard DA/SA variant instead, whether I then used the rear decocker that’s on those models to carry hammer down, or chose the model that also has a manual safety and carried cocked and locked. The single action trigger wouldn’t have all of that pre-travel, and, frankly, I do not like the idea of anything that tempts you into staging the trigger on a self-defense firearm.

The HK P30SK LEM is a very well-made firearm, it just isn’t a fit in my stable.

Reliability * * * * *
Zero issues across a handful of different ammo types and weights, as you’d expect.

Accuracy * * * 1/2
It’s definitely an accurate gun for a sub-compact, thanks in part to a generous sight radius. Considering the single action trigger, though, I found it harder to actually shoot accurately than it should have been.

Ergonomics * * * *
Grip ergos are a clear strong point of the P30 and VP9. Extremely comfortable and highly adjustable. For me, a star has to come off as I’d prefer shorter-in-length slide stop levers and a thumb button magazine release (or paddles that extended out farther towards the front of the trigger guard would make it easier for my hand size). Maybe a plastic surgeon can remove some length from the slide top levers and add it to the magazine release levers?

On The Range * * *
That grip feels very good in the hand, but if you get at all sweaty the pistol starts to move around on you. It’s a fairly snappy little thing — a relatively strong recoil impulse combined with plenty of mass in the slide — and the grip texture is decent, but not aggressive enough outside of ideal conditions. The trigger is . . . a bit weird. I expect some gentle filing or stoning would clean and crisp up the single action and I’d be a lot happier, but as-is there’s just too much sponginess, grittiness, and creep and the reset is longer than I’d like. The trigger is almost there, but needs some TLC. And if I’m going to have a single action pistol trigger, I’d just as soon have a cocked hammer and the trigger already staged rearwards.

Overall * * *
Hey, the P30SK LEM is a great gun — reliable and comfortable — but its age is showing. In the last days of 2018, there’s no shortage of skinnier pistols with better triggers and similar capacities. A standard-sized (or even the “L”) P30 LEM makes much more sense to me for a law enforcement duty pistol, as the SK is too small for that role and the LEM trigger doesn’t make sense to me outside of that role. Ultimately, the P30SK LEM and I just aren’t a match. Springfield XD-S and a Bag Carry: Everyday Carry Pocket Dump of the Day