How many times does this piece of firearms history have to be declared “legal”? (Photo: David Codrea)

U.S.A. – -(Ammoland.com)- A lawsuit filed Thursday in the United States District Court for the District of Columbia seeking injunctive relief from the Trump administration’s redefinition the legal term “machinegun” and its resulting ban on “’bump fire’ stocks, slidefire devices, and devices with certain similar characteristics.” The action was filed by attorneys Stephen Stamboulieh and Alan Beck on behalf of plaintiffs Owen Monroe, Scott Heuman and this correspondent.

The complaint asks the court, among other things, to:

Filing in the District was “a good choice since most of the attack is over the Administrative Procedure Act, and in the DDC they know that and take it seriously,” attorney and author David T. Hardy notes on his Of Arms and the Law Blog. Hardy summarizes other points raised in the complaint:

Interesting points on a quick read: para 16, ATF has ruled at least ten times that a bumpstock is not an MG. Para 19-20, the rule making says bumpstocks were used in the Las Vegas killings, yet FBI has refused a FOIA request for just that data. Para 22, FBI refused to let ATF examine the guns that were used to see what their firing mechanisms were like. Para 55 & 84 ff. challenges the status of the Acting Attorney General who signed the rule.

As far-fetched as some may say the question of bump stock use is (as opposed to attachment on guns that may or may not have been modified), it is the government that has fueled such speculation. ATF stated in an official report that “on scene personnel were not allowed to physically examine the interior of the weapons for machinegun fire-control components or known machinegun conversion devices such as Drop-In Auto Sears, Lightning Link, etc.” Since then there has been no Report of Technical Examination, and rather than address that, the Final Rule attempts to deflect by essentially saying it doesn’t matter.

It hardly seems out of line to know for sure. The public also deserves to know why FBI has refused to answer a Freedom of information Act request and claims it has no way of knowing how many “bump stocks” have been used elsewhere in violent crimes.

As for Acting Attorney General Matthew Whitaker not having authority to sign the rule, this column shared that question posed by attorney Stamboulieh on December 9.  Curiously, almost two weeks later, The Washington Post reported that was a serious concern among “senior Justice Department officials.”

One other factor makes this complaint unique, and that involves a “bump stock” I own that started life as an Akins Accelerator. Here’s what Congressional Research Service had to say in its report:

“On December 13, 2006 … ATF … reclassified bump-fire systems like the Akins Accelerator as a machinegun, because it was equipped with a ‘coiled spring’ and initiated automatic fire with a single trigger pull,” the report states. “In an unpublished decision, the U.S. Court of Appeals for the Eleventh Circuit upheld ATF’s decision.” Conversely, “Other manufacturers submitted modified ‘bump-fire’ or ‘slide-fire’ stocks that did not include a ‘coiled spring’ or similar mechanisms to the ATF for classification,” the report notes. “From the ATF rulings discussed above, it appears that bump-fire stocks with ‘coiled springs’ and that initiate automatic fire with a single trigger pull are regulated as firearms under the NFA; however, modified stocks without any ‘automatically functioning mechanical parts or springs’ are not similarly regulated.” 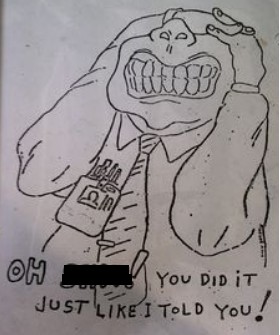 The guy in this old poster needs an “ATF/ Firearms and Ammunition Technology Division” badge.

The stock I obtained, signed by inventor Bill Akins and still in its original packaging, was initially approved as “legal,” then was deemed “illegal,” subsequently returned for rework to remove the spring and once more deemed “legal.”  Now it is supposedly illegal again and if I don’t obey the order to rid myself of my twice-confirmed “legal” property, I’ll be branded a felon and subject to life and freedom-destroying punishments. For the record, I have no intention of using it and don’t even own the type of rifle it is made for. I own it, among other reasons, because I consider it a piece of firearms history, because it pleases me to own it, because the gun-grabbers don’t want me to, and because it is my right.

It will be interesting to see what happens next, especially considering three other lawsuits have been filed:

You can read our complaint below:

As a matter of necessary disclosure, I have written about or joined with attorney Stephen Stamboulieh in other ventures included in this link.

David Codrea is the winner of multiple journalist awards for investigating / defending the RKBA and a long-time gun owner rights advocate who defiantly challenges the folly of citizen disarmament.

He blogs at “The War on Guns: Notes from the Resistance,” is a regular featured contributor to Firearms News, and posts on Twitter: @dcodrea and Facebook.